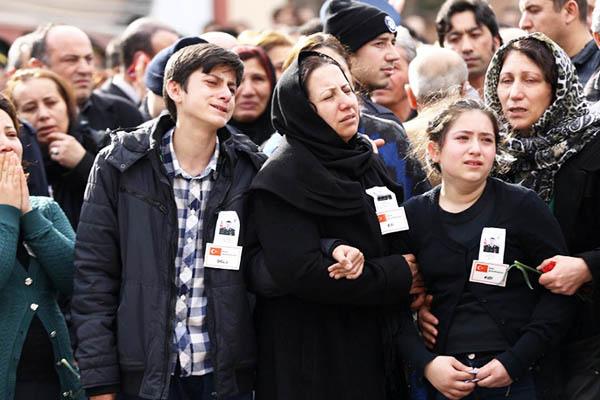 In statement, Kurdistan Freedom Falcons group warns tourists to ‘stay away’ from Turkey.

The Kurdistan Freedom Falcons, who have been linked to the outlawed Kurdistan Workers Party, said the attack was revenge for operations by the Turkish military in the southeast of the country and warned foreign tourists not to visit Turkey.

“On Feb. 17 in the evening a suicide attack was carried out by a sacrifice warrior on a military convoy of the fascist Turkish Republic in Ankara… The attack was realized by the Immortal Battalion of the TAK,” the Falcons said in a statement on their website.

Wednesday’s attack struck at the heart of Ankara in an area where institutions including the army headquarters and parliament are concentrated. It was one of the deadliest attacks on the Turkish military in recent years.

Ankara has insisted that the Syrian Kurdish People’s Protection Units and Democratic Union Party were behind the attack, although its claims have met with skepticism from chief NATO ally the United States.

The Protection Units and Union Party deny accusations from Ankara that they are branches of the Workers Party and have rejected having any involvement in the attack.

The Falcons named the suicide bomber as Zinar Raperin born in 1989 in Turkey’s Kurdish-dominated eastern region of Van, who had been involved with the Kurdish “freedom struggle” and since 2011 with the Falcons.

The Falcons’ claim of the bomber’s identity is in contradiction to Prime Minister Ahmet Davutoglu who said the bomber was a Syrian national Protection Unit operative.

In an additional English-language statement the Falcons warned they aim to “destroy” tourism in Turkey. “We warn the foreign and native tourists not go to the touristic areas in Turkey. We are not responsible for who will die in the attacks targeting those areas,” it said.

The Falcons are a little-known group, who have nonetheless risen to prominence in recent months after claiming firing mortar shells on Istanbul’s Sabiha Gokcen airport on Dec. 23. The firing left one airport cleaner dead and also damaged several planes.

In an interview published by pro-Workers Party media on Wednesday, the group’s commander Cemil Bayik said he did not know who carried out the Ankara attack but said it could have been “revenge for the massacres” in Kurdish areas.

Keeping up the insistence that the Protection Units were to blame, President Recep Tayyip Erdogan on Friday warned the United States against backing the groups, saying there was “no doubt” they were behind the Ankara attack.

Erdogan said Turkey was “saddened” by the stubbornness of the West in not linking the Protection Units to the Workers Party, which has waged a three-decade insurgency against the Turkish state and is recognized as a terror group by the United States and E.U.

In a phone call later to U.S. President Barack Obama, Erdogan emphasized “the importance of solidarity between allies in the fight against terrorism,” the Turkish president said in a statement.

Obama called for “the immediate halt” in territorial gains by the Protection Units and the Syrian regime in northern Syria, which he said “cause tension” and “affect the fight” against the Islamic State, the Turkish statement said.

The United States works with the Protection Units as the sole truly effective force on the ground in the fight against I.S. and has shown no sign of changing its stance on the group.

U.S. State Department spokesman John Kirby said Thursday it was still an “open question” who had carried out the Ankara attack.

Ankara prosecutors said Friday that six more suspects had been detained in the investigation, bringing the total to 20. In Ankara meanwhile, eight fatalities in the attack were laid to rest following a funeral ceremony at the city’s vast Kocatepe Mosque. Six of those buried were civilian employees of the military and two were soldiers. In all, 20 soldiers of varying ranks were killed in the attack, seven civilian employees and a young female journalist.

U.S. Talks with Pakistan on Safe Havens for...