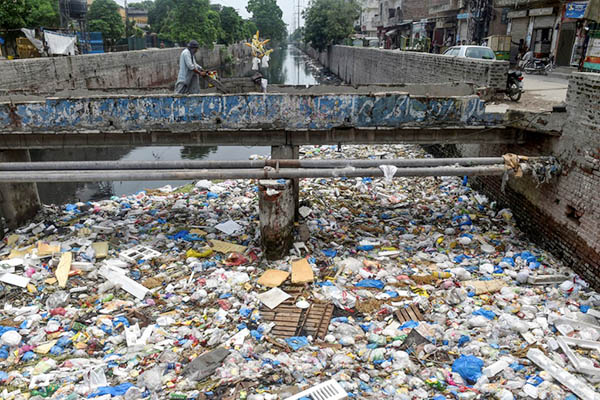 A waterway in Lahore overflows with plastic bags and garbage. Arif Ali—AFP

The Lahore High Court (LHC) on Thursday ordered an “immediate” ban on the use of polythene plastic bags across Punjab, and directed authorities to implement the restriction in letter and spirit.

“Justice Shahid Karim of the LHC, [while hearing] our petition, has extended the ban on use, manufacture and sale of polythene bags to all cities of Punjab,” petitioner Abuzar Salman Khan announced on Twitter. “Now there is complete ban on polythene bags all over Punjab. Director General EPA [Environment Protection Agency] has been directed to ensure ban is implemented,” he added.

During proceedings, the petitioner had argued that plastic bags are a major source of pollution and significant damage has been caused to the environment due to their continued use and manufacture.

The ruling follows the Punjab government banning the use of single-use plastic bags in provincial capital Lahore last month. Notified in October 2019, the ban had earlier been spottily implemented with several retailers still using it. There is also a complete ban on the use of plastic bags in the federal capital.

Discouraging the use of plastic bags is part of the incumbent government’s Clean Green Pakistan initiative and earlier bans have been accompanied by crackdowns on shops flouting the regulations, and imposition of hefty fines on companies producing, selling or distributing them.