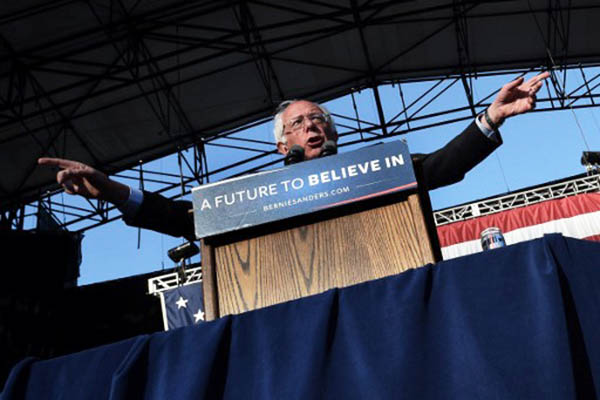 A cache of leaked emails from Democratic party leaders’ accounts includes at least two messages suggesting an insider effort to hobble Bernie Sanders’ upstart campaign, a revelation that threatens an uneasy truce within the party.

The release on Friday of more than 19,000 emails sent and received by seven top Democratic National Committee officials, by anti-secrecy website WikiLeaks, comes at a time when the party is anxious to project an image of unity. It also threatened to overshadow Hillary Clinton’s first joint rally on Saturday with her newly-named running mate, Tim Kaine, two days before the Democratic Party Convention kicks off in Philadelphia to officially crown the White House nominees.

Clinton’s Republican opponent Donald Trump pounced on the leaks as he tries to scoop up disaffected voters who feel Sanders—a self-described democratic socialist from Vermont initially dismissed as a fringe candidate—was denied a fair shot at the nomination by the political establishment.

In a May 5 exchange, DNC Chief Financial Officer Brad Marshall asked if someone could ask a person he did not name, presumably Sanders, about his religious belief in the conservative states of Kentucky and West Virginia. “Does he believe in a God. He had skated on saying he has a Jewish heritage,” the message said. “I think I read he is an atheist. This could make several points difference with my peeps. My Southern Baptist peeps would draw a big difference between a Jew and an atheist.”

Amy Dacey, the committee’s CEO, responded in all caps: “AMEN.”

The Intercept news website quoted Marshall as saying, “I do not recall this. I can say it would not have been Sanders. It would probably be about a surrogate.”

A May 21 email chain discussed Sanders’ assertion in an interview that he would oust party chair Debbie Wasserman Schultz once he’s elected to the White House. Writing from a Gmail account that media reports said belonged to Wasserman Schultz, the chairwoman noted, “This is a silly story. He isn’t going to be president.”

Sanders waged a feisty yearlong battle against Clinton in the Democratic primaries. She clinched enough delegates to secure the nomination in early June, but Sanders did not concede defeat and endorse her until July 12. Sanders’s campaign manager Jeff Weaver, in an interview with ABC News, demanded answers on Saturday about the growing controversy.

“Someone does have to be held accountable,” said Weaver, who said the emails seemed to show misconduct at a very senior level of the DNC.

The Democratic Party, Weaver said, seemed to have “its fingers on the scale” for Clinton, he added during the interview, which was posted on the television network’s website. “We have an electoral process. The DNC, by its charter, is required to be neutral among the candidates. Clearly it was not.”