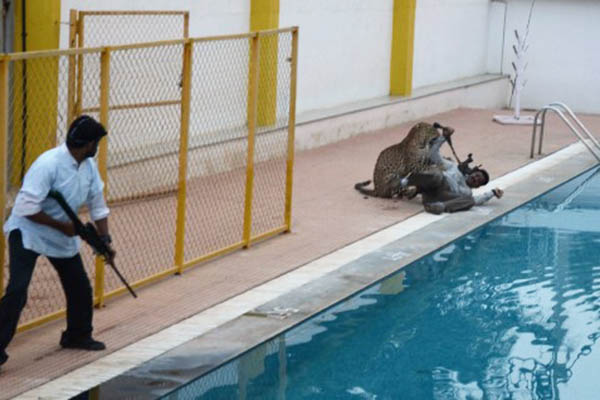 The wild animal was released into the wild following his capture.

A male leopard, which strayed into a school in India’s Bangalore, injured five people during an hours-long attempt to catch the beast, a wildlife official said.

Photos of the incident show the animal prowling around the closed school on Sunday and trying to maul forestry officials, a wildlife activist and others who came too close.

Ravi Ralph, chief wildlife officer in the state of Karnataka, said the leopard appeared to have got into the school from a nearby forest area by jumping over the compound’s wall. The animal is seen attacking a man lying on the ground who uses his hand to defend himself. The cat is also shown sinking its claws into a man’s leg as he tries to climb a gate.

“The leopard was caught and caged after a four-hour operation, when it was trapped in a room with one tranquilizer shot through a wire-meshed ventilator,” Ralph told AFP.

The leopard was taken to Bangalore’s Bannerghatta zoo for observation, but was reportedly later released into the forest. His victims were treated for minor injuries.

Leopards number between 12,000 to 14,000, according to a national survey released last year. They are increasingly venturing into populated areas as their habitats become depleted. A leopard killed a five-year-old boy in the courtyard of his home in central India in 2014. Video footage from Mumbai in 2013 showed a leopard creeping into an apartment block foyer and snatching a small dog.