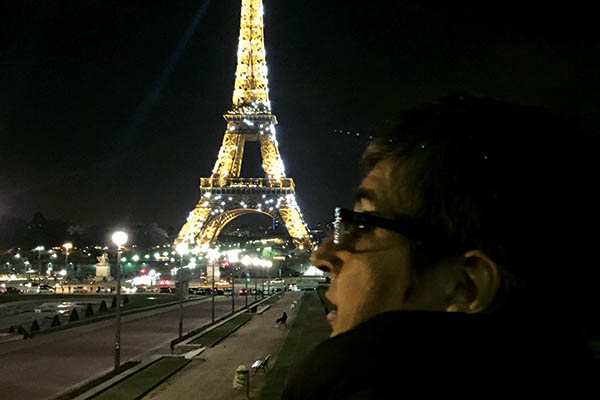 “Activism has to be about action,” Sabeen Mahmud said in an interview. “The democratization of technology also provides a platform for the super-efficient perpetuation of mediocrity.” Of course, Sabeen was anything but mediocre. Critical of armchair activism, she believed that being political meant being involved in public life and developing political will. Those who had only heard of Sabeen are by now aware of the extent of her activism and influence.

Not too long ago, Sabeen posted a photograph of Jim Morrison’s grave at the Père Lachaise Cemetery in Paris, with this quote by him: “I see myself as a huge fiery comet, a shooting star. Everyone stops, points up and gasps, ‘Oh look at that!’ Then, whoosh, and I’m gone and they’ll never see anything like it ever again and they won’t be able to forget me—ever.”

Sabeen, 40, was involved with The Indus Entrepreneurs, the Citizens Archive of Pakistan, the All Pakistan Music Conference (she played the sitar), and was the force behind Pakistan’s first Hackathon, geared at creating digital solutions to some of the country’s worst logistical problems. In 2007, she set up Karachi’s T2F bookstore and café—the secular, democratic, inclusive bastion for the city’s arts and culture scene—as the first project of her PeaceNiche nonprofit. It was here that she hosted a talk on Balochistan the night she was gunned down, on April 24. No one has yet claimed responsibility for her murder.

We first met just a few years ago at a conference at the Lahore University of Management Sciences and stayed in touch, our friendship evolving over Facebook. We last met in Paris, a month before her death. She had come as part of a delegation of global arts leaders. We agreed to meet and I prepared a hastily thrown together dinner. We chatted about everything under the sun, including the lack of kindness and lazy humor that passes for wit in Pakistan these days. She said she was the “anti-tourist,” that she avoided famous tourist attractions. She then described catching a glimpse of the Eiffel Tower from the metro she had taken to get to my apartment. She was surprised at falling in love with one of the world’s most recognizable, even clichéd, symbols. We had this in common, and I knew what I was going to surprise her with next.

After dinner, I stuffed my mini-speakers and a small picnic in my satchel. We walked to the Trocadéro, 10 minutes away, to view the tourist attraction we were both fascinated with despite ourselves. As we approached the Eiffel, her eyes widened. “Wah, bhai!” she said, shaking her head slowly and taking out her cellphone. I kept checking the time—the surprise I had planned for her happens every hour on the hour—coaxing her to where there were less tourists and vendors. Finally, a few minutes before midnight, we settled on the wall of the ramp leading down from the Trocadéro to Place de Varsovie.

“By the way, I’m very accident prone,” she said, as she looked down at the 20-feet drop. (On the way back, she did trip over some bushes, grazing her palms and knees on the gravel.) “What will happen if I fall from here? Or jump?”

“So sad,” she laughed, “You are more worried about that ruining your night!”

And just then, in a moment of vulnerability, friendship, and honesty, I said, “No, Sabeen, you don’t know but I worry about you. Please don’t die. You have a lot more work to do. You people have given us hope after a long time and Pakistan needs you. Please be careful. Please don’t die! And, yes, I do have to wake up at 6 a.m.!”

Perhaps this heartfelt confession and my unabashed admiration embarrassed her, humble and down-to-earth as she was. “If I die, I die,” she shrugged. “Let’s at least live today!”

At midnight, I switched on Nusrat Fateh Ali Khan’s qawwali “Man Kunto Maula” as the lights began twinkling on the Eiffel. It was magical.

Though our values overlapped on many fronts, our beliefs about the Hereafter could not have been more different. I hope she is pleasantly surprised—and it brings a smile to my face imagining her saying “I did not see that coming”— listening to the qawwali, live.

Farewell, my friend. We’ll never see anyone like you ever again and we won’t be able to forget you—ever.

Ansari is the Paris correspondent for ADA magazine, which ran a different version of this piece in Issue no. 30, Volume VIII. This summer, at the Southbank Center in London, an installation by PeaceNiche, “Dil-Phaink: From the Streets to the Heart of Pakistan’s Pop Culture,” will go ahead as planned. From our May 23-30, 2015, issue.

Women vs. Misogyny in Pakistan