Life After the Quake 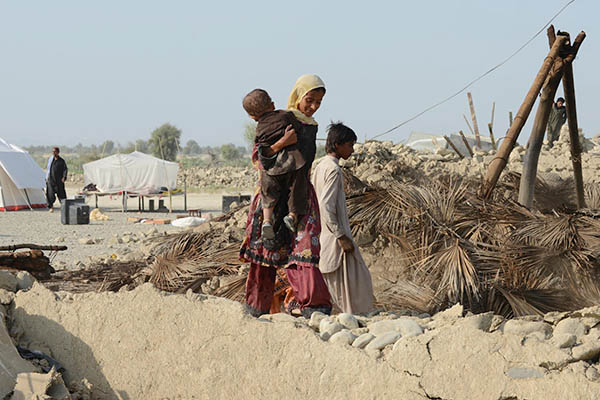 Once a town of 7,000 inhabitants, Gajjar is now little more than a moonscape of dusty ruins, its mud houses reduced to rubble by the huge earthquake that hit southwest Pakistan.

The death toll from the 7.7-magnitude quake that hit the vast, impoverished province of Balochistan stands in excess of 500 and even after three days the government is struggling to reach survivors.

The National Disaster Management Authority (NDMA) says it has dispatched 25,000 tents and 6,000 blankets to the affected areas, as more than 100,000 people made homeless by the quake face a third day in scorching heat.

Infrastructure in the rugged, arid province is minimal and the Army and paramilitary forces have been heavily involved in the relief effort.

But in Gajjar, as in many places, survivors say they have seen little in the way of aid from the government.

Baloch separatist rebels have set up the town’s only relief camp, but locals say they are relying on river water, scavenged dates and the charity of friends to survive. “We don’t have anything to eat except dates. We send our family members to the nearby river to fetch water,” said local Khalil Ahmad. “We still hope for government’s assistance, which does not seem to be in sight.”

The vast majority of buildings in Gajjar were made of mud bricks and collapsed easily when the tremors began. Even the town’s few concrete buildings—government offices, a high school and a religious seminary—suffered major damage.

Naseer Ahmad Mir Wari, a senior official with the local government, said they had handed out 300 tents, leaving thousands to cobble together makeshift shelters from sticks and rags to get respite from the blazing sun.

The town’s hospital—which had 12 beds—has been left unusable, with huge cracks in the walls.

Gajjar lies in the Mashkey area of Arawan district, where the epicenter of the quake was located, and is a stronghold of Baloch separatist rebels waging a decade-long insurgency against the Pakistani state.

On Thursday a helicopter carrying the head of the NDMA came under rocket fire while flying in Arawan district, highlighting the dangers facing the relief effort. No one was hurt and no damage done.

The sheer scale of the territory involved is daunting—the population of Awaran is scattered over more than 21,000 square kilometers—and infrastructure is extremely limited, with few medical facilities or even roads.

The quake is Pakistan’s deadliest since the devastating Kashmir tremor of 2005, which killed 73,000. The toll is expected to rise further as rescue teams dig through the rubble of countless flattened mud-brick homes.

Interior Minister Chaudhry Nisar told Parliament on Thursday a “huge activity” was under way to help those affected but he admitted teams were struggling to reach some areas.

Amid the dust and wreckage of Gajjar, there have been some moments of hope—three children, the youngest just three years old were found alive in the ruins of a house.

Moments of solidarity too—the grocer who handed out rice, biscuits, potato chips and flour to the hungry, and the pharmacist who dug through the rubble of his shop to get medicines for those who needed them.