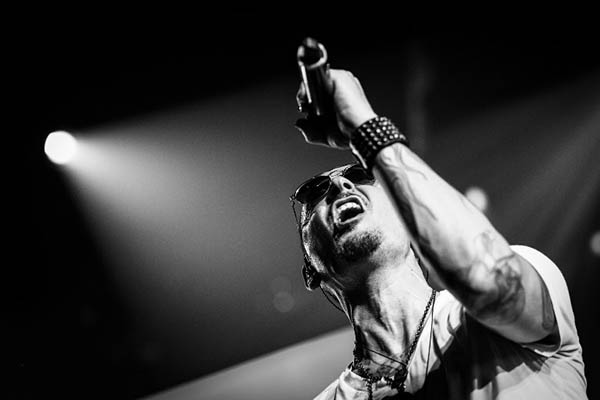 Band acknowledges that singer, who hanged himself, had often been inspired by the very demons that drove him to suicide

Linkin Park said on Monday it could never replace singer Chester Bennington after his suicide as the band acknowledged that his “demons” had fed his music.

After three days of shocked silence since Bennington hanged himself, the chart-topping California metal band hailed the “outpouring of love and support” and said Linkin Park’s future was uncertain. “Your absence leaves a void that can never be filled—a boisterous, funny, ambitious, creative, kind, generous voice in the room is missing,” the band said in a statement. “We’re trying to remind ourselves that the demons who took you away from us were always part of the deal. After all, it was the way you sang about those demons that made everyone fall in love with you in the first place. You fearlessly put them on display, and in doing so, brought us together and taught us to be more human. You had the biggest heart, and managed to wear it on your sleeve.”

Bennington, 41, had been open about his struggles to overcome drug and alcohol abuse and low self-image, caused in part by being molested as a child. The Arizona-born singer brought his raw rage into Linkin Park, which blended metal with pop song structure and rapping by guitarist and songwriter Mike Shinoda.

A coroner’s report confirmed that Bennington committed suicide. An employee at his Los Angeles home found him hanging by a belt Thursday morning—which would have been the birthday of his friend Chris Cornell of Soundgarden, another celebrated rock singer who recently killed himself.

Linkin Park had been due to start a tour a week later. In the statement, the band said that Bennington had been speaking about future plans together. “While we don’t know what path our future may take, we know that each of our lives was made better by you. Thank you for that gift. We love you, and miss you so much,” the statement said.

Linkin Park over the weekend set up a website dedicated to Bennington with tributes by fans and information for suicidal people who need help.