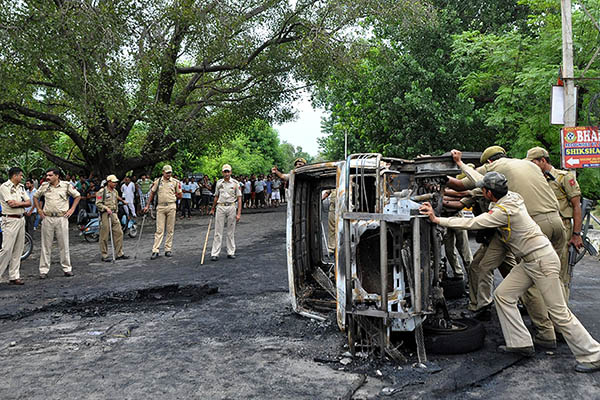 Pakistan alleges that India killed a civilian by launching ‘unprovoked’ salvo early in the morning.

Islamabad accused New Delhi on Monday of killing a civilian with “unprovoked firing” in Kashmir in the latest in a series of recent clashes in the disputed Himalayan region.

Tensions have flared again in the heavily militarized Kashmir valley with the nuclear-armed neighbors accusing each other of cross-border firing.

The latest incident took place when “Indian troops resorted to unprovoked firing in the wee hours Monday” in three areas along the de facto border known as the Line of Control (LoC), a military official said.

“Pakistani troops effectively responded to Indian firing,” he said, adding that one civilian was killed “due to unprovoked Indian shelling.”

Prime Minister Nawaz Sharif tried to ease tensions with India by urging both sides to work swiftly to shore up a 10-year ceasefire threatened by the recent attacks.

On Sunday, Pakistan accused India of firing on border posts in Kashmir and neighboring Punjab province.

The picturesque Himalayan territory of Kashmir is divided between India and Pakistan by the U.N.-monitored LoC, but is claimed in full by both countries. A deadly flare-up along the LoC in January brought peace talks to a halt.

They had only just resumed after a three-year hiatus sparked by the 2008 attacks in Mumbai that killed 166 people. India blamed Pakistani militants for the attack.

More than a dozen armed groups have been fighting Indian forces since 1989, demanding independence for Kashmir or its merger with Pakistan. India and Pakistan have fought three wars since their independence from Britain in 1947, two of them over Kashmir.

What better way to win elections in India, then to orchestrate some cross border madness

Hopefully this should all settle down after the Indian elections.

LOC agression *Yawn. Its like watching a rerun over and over again. The only thing Indian and Pakistan will ever go to war for is water, in the future.