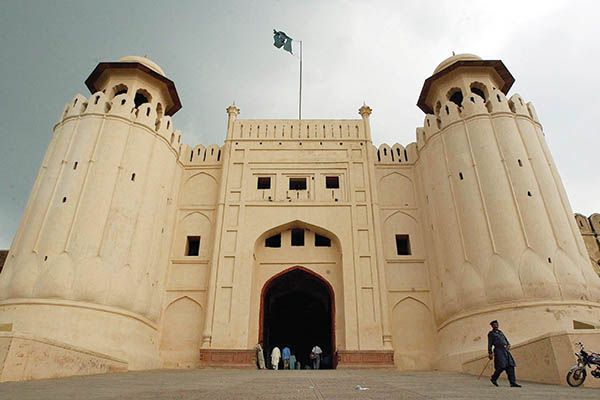 The main gate of the Lahore Fort. Jewel Samad—AFP

In 1691, the Mughal biographer Sher Khan Lodi wrote that “it is impossible to capture the essence of music in pen and ink on the surface of a page.” This is true of all music: writing about music is famously like dancing about architecture. But the Hindustani classical tradition to which he was referring is, in addition, not based on fixed pieces of music written down on paper. In the performance of a Hindustani raga, music is only ever brought into being in the moment of its sounding, improvised by the creative artist in response to that particular audience. Once the last note has died away, the music is lost forever, taking the visceral, emotional, human experience of being there, listening, with it into silence.

Leaving behind… what, exactly? What residue remains of the moment of musical experience, when everything else has gone? And why have so many writers across the ages tried so very hard to recapture those lost moments on paper, including myself, when we know it can’t be done?

Since the late 19th century we have been able to rehear the musical moment through audio and visual recording technology. The problem is thus most acute for music before the era of recorded sound: for Pakistan and India, the sounds of the great raga performances of the distant past are forever lost to us. Not only that: there are entire ragas that now lie beyond recall, obsolete before the 20th century when we might have had a chance to record them; and tens of thousands of songs lie silent on the page with few clues as to how they were once sung.

But in fact, the new technology plays us false. The sound recording doesn’t tell us what it felt like to be there, then; only what it feels like to listen to it here and now, split apart from the person who made the sound and the place it was made in. It doesn’t tell us anything of what that music meant to the people who made and listened to it—which to me is everything that makes music compelling.

It is here, oddly, that writing on music comes into its own, especially before the era of recorded sound. Writers in the Mughal period knew that it was impossible to capture music in writing, and yet they wrote about raga over and over again, from many different angles. What I think Mughal writers on music were really straining to recapture was not so much the sound of the ragas, though they tried to do that too, but the world of insight and intense emotion wrapped up in the human experience of listening.

What happens, then, when we try to use some of those writings to bring a lost raga, beloved at the 18th-century Mughal court, back into the land of the living?

That lost raga is Rag Gaund, a raga associated with the monsoon season, which appears to have been the favorite raga of the Mughal emperor Shah Alam II (r. 1759–1806).

A raga has two avatars. Sonically, it is a melodic formula or skeleton that provides a blueprint for composition and performance. Each raga is made up of a set of soundmarks that identify it uniquely as that raga. But a raga is much more than just sound; it also takes a visual or imagined form as a hero, heroine, or supernatural figure embodying a specific emotional mood that is awakened by the musician’s expert handling of those soundmarks. Monsoon ragas all embody slightly different moods of longing and fulfillment brought on by the monsoon—and they also in theory possess the power to bring on the drought-quenching rains.

Unfortunately, Rag Gaund has been obsolete in Hindustani music since the turn of the 20th century. I am no Orpheus, and we can’t bring the sound of Rag Gaund back from the dead. But what we can identify through late Mughal musical notations, painting and poetry is Gaund’s specific emotional flavor, and the effect it had on Mughal listeners—and one listener and song-composer in particular: the Emperor Shah Alam II.

The life and reign of Shah Alam II was full of pathos and tragedy, as well as resilience and dignity in the face of his diminishment. By the late 18th century, his empire was reduced to the outskirts of Delhi after a series of invasions, wars, and the encroachment of the British East India Company. In 1788 Shah Alam’s power had dissipated to such an extent that he had his eyes gouged out in his own throne room by the Afghan warlord Ghulam Qadir. Thereafter, he lived out his long life as a puppet of the Marathas, and finally, after their seizure of the Mughal capital in 1803, the East India Company.

Among other accomplishments, Shah Alam was renowned as a fine poet and composer of songs in the Brajbhasha, Urdu, and Persian languages. His best songs were compiled into a large collection in 1797 called the Nadirat-i Shahi, the “emperor’s choicest compositions.” Urdu and Hindi literary scholar David Lunn and I first became inspired to find out more about Rag Gaund because, although it has since been lost, it was clearly Shah Alam’s favorite raga, and the most important monsoon raga of the late Mughal period.

What, then, were Rag Gaund’s specific emotional qualities, and why did it appeal so much to Shah Alam’s state of mind? We can use clues from its 18th century melodic structure, Shah Alam’s own poetry in Rag Gaund, and ragamala paintings of the time to get a feeling for it. As Shah Alam wrote (and translated by David Lunn):

(Now, lover, if you should so desire, listen to the melody of Gaund

Give voice to the plaintive cries of your heart; tell, dear, your emotions in company.) 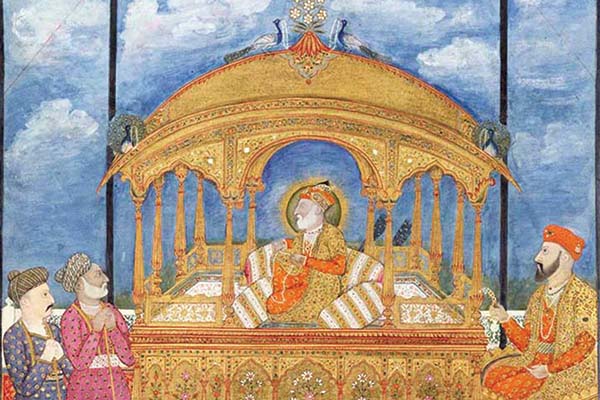 The most obvious hints that Gaund was a monsoon raga lie in the poetry. But we can also tell this from its sonic structure in Persian and Urdu music treatises c. 1790–1870, which show that Gaund had characteristic Malhar soundmarks—and also because, remarkably, the songs of the 1797 Nadirat-i Shahi are listed in groups according to our modern understanding of the ragas’ melodic relationships to each other. Suffice it to say, this melodic evidence shows that Gaund was a major monsoon raga close to today’s Miyan ki Malhar associated with earthiness, the counterpart to Rag Megh, the “cloud” raga associated with the rain-laden sky.

It is Shah Alam’s poetry, though, that nuances our understanding of Gaund as a monsoon raga associated with the earth. Shah Alam’s songs drench us with rainwater, low dark clouds, thunder and lightning, and earthy greenery, and draw out the exquisite monsoon tension of love stretched between longing for and fulfillment of union: of the lovers’ return at this time of tucking up together in a secluded place. These songs are all in David Lunn’s translation:

(The rains and the waters, the thunder roars and the clouds gather, now our eyes are longing to drink

The lightning flashes and shakes my very life; my darling, how will you get your satisfied rest?)

And a very clever one: what does it feel like when the rains have come, but your lover still has not returned?

(The promises of the koyal, papiha and peafowl have distressed me

Without the eyes of my beloved, the rainy season might as well last six months!)

This one makes a very specific use of onomatopoeia to drum home the drumming of the rain on the earth and the rooftops:

(Seeing the green earth, the peafowl make a noise

In every direction over every house the lowering clouds swirl and the thunder roars.)

Here’s one that specifically refers to Shah Alam’s bodily experience of the monsoon and of Rag Gaund:

(Come on this beautiful, splendid day; today, Wednesday, take the air and delight in the garden

Emperor Shah Alam, sate your thirst and take pleasure in the matters of Rag Gaund.)

Emotionally, then, Rag Gaund seems to have represented the imminent moment of joyful union between the clouds and the earth, the lover and the beloved—the moment of the most intense anticipation when the lover knows that the promise of her beloved’s return is definitely going to be fulfilled, but he has not quite yet come. This is reinforced by paintings of Rag Gaund in the ragamala tradition. The inscription on one 18th century miniature, translated by Richard David Williams, describes the ragini in the painting thus:

Gaund is an impassioned exquisite woman / She holds the thought of her distant lover tenderly in her heart. / Sitting with the one source of her love before her / she reads aloud the words inscribed upon her heart. / Her friends beside her play to her; / with sweet notes they sing of the thrills of happiness. / When she hears word of her lover’s approach / her body blooms and her bliss thunders. / She decks herself in a special colourful dress, / and watches the roads in every direction. / Gaund is an impassioned woman, beautiful in her desire, / completely devoted to her lord. / Her soul knows of the approach of her lover; / the flower of her body burns.

What, then, was the particular emotional valency of Rag Gaund for Shah Alam II, and why did he set so many of his songs in this raga? Shah Alam’s songs in Rag Gaund do indeed have a specific, local cast to their emotional flavor. Many of them refer to the monsoon as it was experienced in the pleasure gardens built explicitly to enjoy the rainy season at the Mughal summer palace at Mehrauli, just south of Delhi, with its restful resident Chishti saint Qutb ud-Din Bakhtiyar Kaki contributing his personal temperament of quiet fulfillment to the atmosphere of this secluded time and space.

From our perspective, the poignancy of these songs is almost painful, for this Mughal emperor’s dearest hopes and desires for his life and his country would remain forever in the realm of longing.

(The great beauty of the green earth pleases, and the clouds circle all around

(I beg this of you, lord Qutb ud-Din, fulfil all the desires of my life

I worship you, please hear me, constantly touching your feet

Give riches and a country to Shah Alam, and fill his treasure house

Strolling beneath the mango trees, gazing at the spread cloth and the waterfalls.)

The hope expressed here, as translated by David Lunn, is deeply sad in retrospect. Rag Gaund had lost its power to turn Shah Alam’s dreams into reality. In 1806, a few months before the emperor died and was laid to rest forever at Mehrauli, deputy British Resident William Fraser wrote home to his father in rural Inverness-shire: “At this time, I was constantly at the side of the King; and could not but admire [his] extreme… nobility… The loss of his eyes does not at all disfigure his countenance; but the history of their loss and of his misfortunes exalts to the highest our pity and our veneration. On his death, and not till then, we may say, that the Line of Timour is extinct as a Dynasty; beginning with the lame, and ending with the blind.”

It took a little longer than that; it was in 1858 that the British sent his grandson Bahadur Shah Zafar into incarcerated exile for the term of his natural life. But the promises of the monsoon birds at Mehrauli were always empty—Shah Alam’s hopes for the restoration of his kingdom were never fulfilled.

Dr. Schofield is a senior lecturer at the Department of Music, King’s College London. An historian of music from Mughal rule in India, she co-edited, with Francesca Orsini, Tellings and Texts: Music, Literature and Performance in North India

Beautiful explanation of imagery of Raga. I still can’t visualise any raga with such imagery. Does this come naturally or one has to develop it by learning.