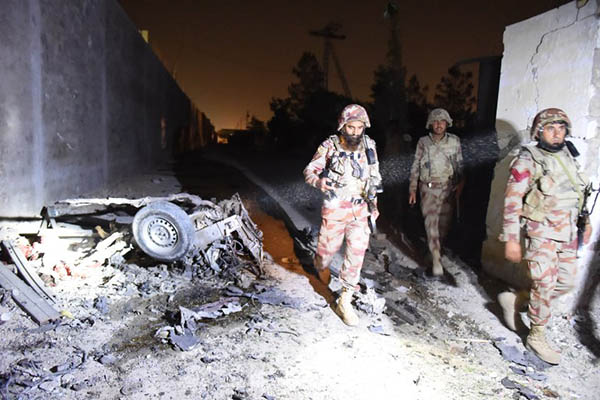 The target of the attack was a local office of the paramilitary Frontier Corps (FC).

“An explosive-laden vehicle carrying five suicide bombers tried to enter the FC help center. Vigilant FC soldiers fired at [the] terrorists and killed them,” the military said in a statement.

Four soldiers were injured in the firefight with the attackers, it added.

The failed attack came just hours after a suicide bomber struck an FC convoy in Nowshera, wounding 10 people. The two attacks on the FC came a day after Pakistani forces killed Salman Badeni—a notorious Islamist militant wanted for more than 100 murders—on the outskirts of Quetta, capital of the restive Balochistan province.

No militant group immediately claimed responsibility for the attacks on Thursday, but the military said the attempted storming of the FC office in Quetta was a “response” to the killing of Badeni on Wednesday.

Badeni was the provincial commander of the sectarian Islamist group Lashkar-e-Jhangvi, widely considered one of the most violent militant outfits in Pakistan. Sunni extremists like members of Jhangvi consider Shia Muslims to be heretics.

Jhangvi is blamed for the deaths of hundreds of Shias in numerous attacks across Pakistan, especially in Balochistan.

A number of Islamist militant groups are active in the province, including the Taliban and local Islamic State affiliates.