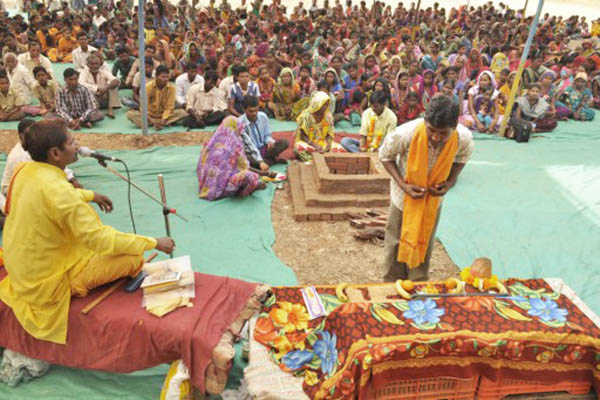 The conversion of 200 Christians in Indian premier Modi’s home state has increased concern over the government’s alleged pro-Hindu leanings.

Hardline Hindu groups came under fire Sunday after some 200 Christians were converted in the Indian prime minister’s home state, amid increasing concern at the right-wing government’s perceived pro-Hindu tilt.

“Extreme right wing is flexing its muscles. VHP/RSS through Hindutatva … rewriting history and economic policies,” Digvijay Singh, a leader of the opposition Congress party, posted on Twitter early Sunday. A Gujarat-based priest said he could not “accept that anyone who has been a Christian will convert to other religion by personal choice.”

“Over 200 people were asked to throw their religious pendants in a holy fire and were given new pendants with the image of [Hindu] Lord Rama,” said Ajit Solanki, a Gujarat state VHP secretary. Solanki however denied using any kind of force or monetary promises, maintaining that the conversions were voluntary.

The world’s most populous democracy is a secular country under the constitution and religious freedom is considered a fundamental right. The issue of mass conversions has paralyzed India’s parliament, with opposition lawmakers demanding Modi make a statement on earlier reports of poor Muslims being coerced into Hinduism.

A hardline group linked to the BJP was accused of converting some 50 slum-dwelling Muslim families about a week ago in Agra. One of the converts told AFP they were promised ration cards and other financial incentives if they switched religions.

Critics say Hindu hardline groups have become emboldened since the BJP was elected, promoting a Hindu-dominant agenda. Modi, who spent his early years in the RSS, has made no comment on religious issues since becoming premier.

He was himself accused of failing to curb 2002 anti-Muslim riots that claimed at least 1,000 lives when he was chief minister of Gujarat. He has always rejected the accusations and India’s Supreme Court found no evidence to prosecute him.

India is 80 percent Hindu while Muslims make up 13.4 percent of the 1.2-billion population. Christians, Buddhists, Sikhs and other religions account for the rest.