Mass Movement Begins Ahead of Hajj 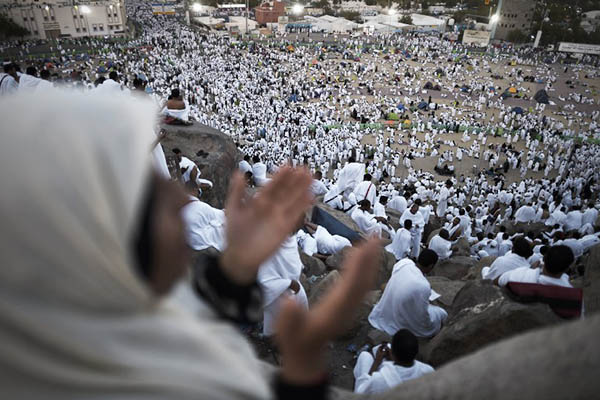 Pilgrims gather at Mount Arafat, with many walking about 15km to reach their destination.

Two million white-clad Muslims from across the globe began the hajj pilgrimage in Saudi Arabia on Tuesday, in one of the world’s largest annual gatherings.

A sandstorm blew and light rain fell as streaks of lightning lit up the skies above the vast plain surrounding Mount Arafat, where the faithful began to arrive ahead of the climax of hajj on Wednesday.

Many reached Arafat by bus but others walked from the holy city of Mecca about 15 kilometers away. Some unloaded their luggage from buses while fellow pilgrims struggled in the winds to set up their tents beside the road.

Police manned checkpoints along the way to verify the permits of the faithful, many of whom appeared worn out, a contrast to the joy pilgrims showed earlier in Mecca.

“Transport is bad, our residence is bad, and food is really bad… even though we paid around $4,000 to come,” said Tunisian pilgrim Abu Salim, 58. “However, tiredness for the sake of God is not that big a problem.”

Most of the throng would pass the evening in the tent city of Mina before moving early Wednesday to the rocky hill where they believe Islam’s Prophet gave his final sermon 14 centuries ago after leading his followers on the hajj.

For many, the hajj will be the highlight of their spiritual lives. This year’s gathering is about the same size as last year’s, with 1.4 million foreign pilgrims joining hundreds of thousands of Saudis and residents of the kingdom.

They are undeterred by a construction crane collapse at Mecca’s Grand Mosque earlier this month that killed 109 people, including foreign pilgrims. About 400 people were injured by the crane, which was working on an expansion of Islam’s holiest site.

Previously marred by stampedes and fires that killed hundreds, the pilgrimage had been largely incident-free for the past nine years after safety improvements.

The hajj is among the five pillars of Islam and every capable Muslim must perform it at least once in a lifetime.

Yemeni pilgrim Mohammed al-Mikhlafi, 54, complained of “a lack of organization” at the gathering, where he planned to pray for Muslim unity. “One belongs to the Islamic State group, another to Al Qaeda. These groups are destroying Islam while fighting under its banner,” said the Yemenia Airways employee, who lives in Saudi Arabia. His wife stood covered from head to toe with only her eyes showing.

This year’s gathering takes place against a backdrop of increased jihadist violence in some Muslim countries, a surge of the potentially deadly MERS virus and the war in Saudi neighbor Yemen. About 100,000 police have been deployed to secure pilgrimage sites and manage the crowds.

Authorities say they are on alert for possible attacks by extremists. I.S. jihadists have bombed security forces and Shia mosques in the kingdom in recent months.

This year’s hajj also comes with Saudi Arabia at war. Since March the kingdom has led an Arab coalition conducting airstrikes and supporting local forces in Yemen against Iran-backed rebels.

Most Yemeni pilgrims performing the hajj this year already reside in the kingdom.

Among other challenges facing Saudi authorities is potential transmission of the deadly Middle East Respiratory Syndrome coronavirus (MERS-CoV). The capital saw a jump in infections last month, but health officials say there has never been a case of MERS infection among pilgrims.

The health ministry has mobilized thousands of medical workers to help ensure a virus-free pilgrimage and to care for routine ailments.

The first day of the hajj is known as Tarwiah Day, when pilgrims traditionally watered their animals and stocked water for their trip to Mount Arafat. On the way, modern-day pilgrims stay in specially built fireproof tents during their stop in Mina, a city which only comes alive during hajj season.

At Mount Arafat they will pray and recite from the Quran. Pilgrims start the hajj by entering ihram, a state of purity in which they must not quarrel, wear perfume, or cut their nails or hair.

During ihram, men wear a seamless two-piece shroud-like white garment, while women must wear loose dresses, generally also white, exposing only their faces and hands. The clothing emphasizes their unity, regardless of whether they spend the hajj in Mecca’s five-star hotels or in shabby high-rise hostels.