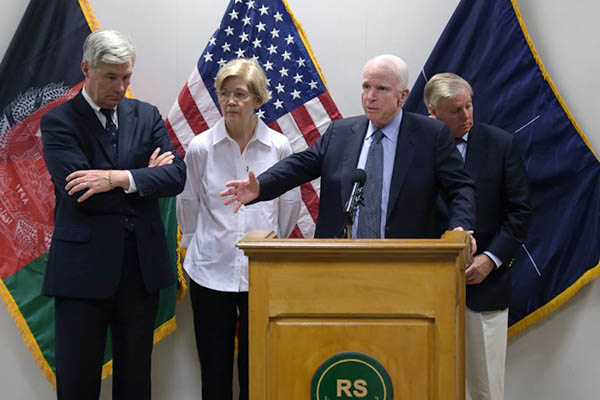 U.S. senator echoes ‘do more’ rhetoric during trip to Kabul

U.S. Senator John McCain visited Kabul on Tuesday and warned neighboring Pakistan that Washington was counting on its support to eliminate militancy and in particular the Haqqani network, responsible for numerous attacks on Afghan territory.

The relationship between the U.S. and Pakistan has been strained at times, with some in Washington believing Islamabad has not done enough to bring its influence to bear to persuade the Afghan Taliban to renounce violence. McCain’s statement came one day after he and a bipartisan Senate delegation visited Islamabad, where Pakistani officials said he reinforced the country’s essential role in regional stability.

“We made it very clear that we expect they [Pakistan] will cooperate with us, particularly against the Haqqani network and against terrorist organizations,” said McCain, chairman of the U.S. Senate Armed Services Committee, in Kabul. “If they don’t change their behavior maybe we should change our behavior toward Pakistan as a nation,” he insisted.

Pakistan has received billions in U.S. aid since the invasion of Afghanistan in 2001. The Taliban-affiliated Haqqani network, based in the border areas between the two countries, has long been thought to have ties to Pakistan’s military establishment. Led by Sirajuddin Haqqani, who is also the Taliban’s deputy leader, they have carried out numerous operations deep in the heart of Kabul, and have been blamed by Afghanistan for a devastating truck bombing which killed more than 150 people in the capital in May.

The Senate visit to Islamabad and Kabul comes as the U.S. is gearing up to send more troops to Afghanistan to support Afghan forces straining to beat back the resurgent Taliban.

McCain called for more than just troops, however, urging “a strategy to win” the war which has dragged on for nearly 16 years and which even U.S. generals concede is at a “stalemate.”

“The strongest nation on earth in this world should be able to win this conflict,” he said, calling for diplomatic efforts alongside a military push.

The U.S. currently has 8,400 troops deployed under the NATO banner, and is thought to be mulling sending up to 4,000 more. Pentagon chief Jim Mattis has stressed his new approach, due to be presented to U.S. President Donald Trump by mid-July, will have a broader “regional” emphasis, with no set timetable.

Trump has remained remarkably taciturn on Afghanistan, but this month gave Mattis authority to set troop numbers at whatever level he saw fit.

NATO, whose Operation Resolute Support numbers some 13,500 including the Americans, also promised last week to increase its presence in Afghanistan. Recent Taliban gains have shaken confidence in Afghanistan’s future and talk of sending NATO troops in has stoked fears the alliance could get sucked back into an unwinnable war.

But Mattis refused recently to “put timelines” on the conflict. “The bottom line is that NATO has made a commitment to Afghanistan for freedom from fear and terror… You can’t let this be undone,” he said in Brussels last week.