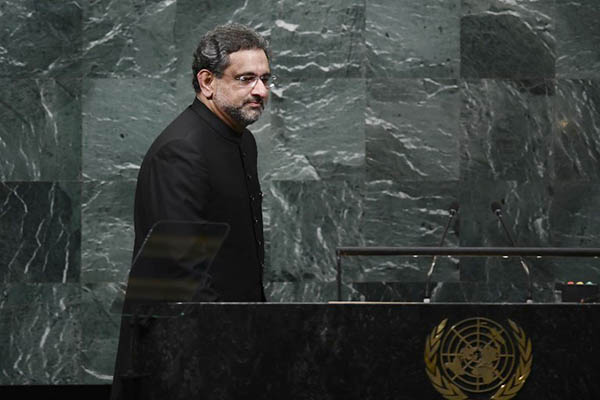 P.M. Abbasi delivered a fitting statement at the U.N. for his audience in Pakistan

Prime Minister Shahid Khaqan Abbasi has done the needful at the 72nd session of the United Nations General Assembly. He said Pakistan had gotten rid of militant safe havens on its soil and now all terrorists were in fact in Afghanistan, where they control almost half the country. He complained that Pakistan was being attacked by terrorist organizations sheltering in Afghanistan and that Pakistani cities were their steady victims.

It’s hard to know how the speech went down at the U.N. but it is quite clear that it satisfied Pakistanis at home who are sick and tired of the world telling them that Rawalpindi sends out terrorists to conquer states it can’t take on. But the satisfaction at home was especially important given the fact that that the Pakistan Muslim League (Nawaz) had been accused by the establishment of not answering back when accused of nursing safe havens. Sadly, the world accepted long ago that the U.N. General Assembly is no more than a talking shop where leaders actually communicate with their own people back home.

Afghan President Ashraf Ghani, however, was “same play” after his meeting with U.S. President Donald Trump. Ghani, it appears, won’t let go so easily. “Reduction of safe havens is absolutely necessary,” Ghani said in an interview. He was sanguine that Abbasi’s meeting with Vice President Michael Pence would have an effect on Pakistan: “I hope that this time, Pakistan will get the message loud and clear that business as usual cannot continue. It’s not in their interest. It’s not in anyone’s interest. Pakistan has never had this type of dialogue with the U.S. and I hope that wisdom and shared national interests will prevail.”

Everything else, however, was hurtful. Everybody knew that Abbasi was standing in for Nawaz Sharif, who was recently shunted out of office and is possibly in permanent exile in the United Kingdom. His finance minster is on the run too and given the state of affairs in the country Abbasi might have to dissolve the National Assembly and go for elections where results can demonstrate how another political party has been sacrificed to Pakistan’s perennial political instability.