Microsoft Gears for Turnaround With Windows 10 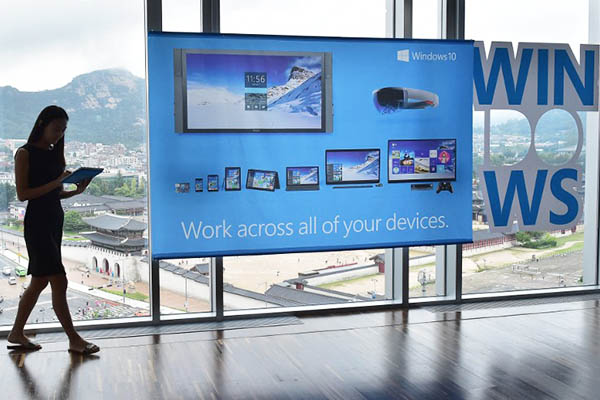 Analysts say the new software has the potential to spur sales of computers and advanced hardware.

Microsoft launched its Windows 10 operating system Wednesday, in its boldest effort yet to reshape the tech giant and move ahead in mobile computing and the “Internet of Things.”

The stakes are high for Microsoft as it pushes out the new operating system for both traditional computers and mobile devices such as tablets and smartphones. The company is hoping the new system can help it gain traction in mobile, where it lags behind Google Android and Apple iOS, and in emerging technologies for computing.

“Our vision was one platform, one store, and one experience that extends across the broadest range of devices from the smallest screens to the largest screens to no screens at all,” said Microsoft executive vice president for Windows, Terry Myerson, in a blog post. “Windows 10 begins to deliver on our vision for more personal computing. In this world experiences are mobile, moving with you seamlessly and easily across your devices. Interacting with technology is as natural as interacting with people—using voice, pen, gestures and even gaze for the right interaction, in the right way, at the right time.”

Forrester Research analyst Frank Gillett said Microsoft faces a tough task in catching up with Google and Apple in the mobile space. Windows’ smartphone market share is around three percent, compared to roughly 80 percent for Google’s Android phone and 15 percent for the Apple iPhone.

“Microsoft will face a long road ahead to gain Windows share in mobile,” he said. “While it will win a growing share of enterprise tablet purchases, the plans for Windows 10 don’t show enough potential to create a differentiated mobile experience that will draw developers and customers away from iOS and Android.”

Richard Edwards, analyst at the consultancy Ovum, said Microsoft is looking beyond mobile to emerging technologies including wearables and other connected devices. “This isn’t about recapturing the important mobile operating systems market,” Edwards said. “It’s about gaining a strong foothold in the next multibillion dollar market: the ‘Internet of Things.’”

Windows 10—Microsoft skipped directly from Windows 8, which got a lackluster response—is being offered as a free upgrade for most devices, making it possible to be available quickly on billions of devices. It will allow for voice, pen and gesture input, and in some cases biometric identification for improved security.

The Cortana virtual assistant, Microsoft’s answer to Apple’s Siri and Google Now, will also be integrated. And Windows 10 will include the Microsoft Edge browser, a move designed to help the tech magnate regain market share lost to rivals such as Mozilla Firefox and Google Chrome.

To appease users who complained about the loss of the “start” button on Windows 8, Microsoft has brought that feature back, while allowing users to switch back to the “live tiles” menu.

Microsoft hopes to break the cycle in which consumers shun Windows for mobile because it lacks the large catalog of applications found on rival platforms, thus discouraging app makers from creating Windows versions. Hit apps could ramp up popularity of Windows-driven hardware made by Microsoft and its partners, and increase opportunities for the company to make money from online activities such as search, shopping and software as services in the Internet cloud.

With Windows 10 and other products, Microsoft is shifting away from one-time software sales to a subscription model—or software as a service—in an effort to better compete in the new tech landscape.

Bob O’Donnell at the research firm Technalysis said the new operating system may help stimulate new sales of computers and other hardware—a phenomenon of the past which has been absent in recent Windows releases. “I’m still hopeful that the PC industry will see some decent upside from Windows 10, particularly in the fourth quarter of this year and into 2016,” he said. “The primary reason for my optimism is that Microsoft has actually integrated quite a few new capabilities into Windows 10 that will benefit from new hardware.”