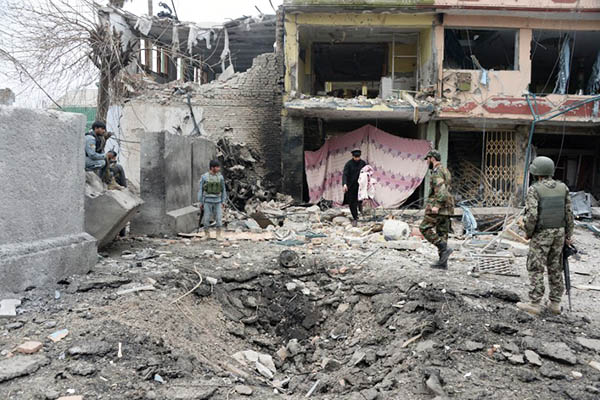 Gunfire and an explosion echoed Wednesday as militants attacked India’s consulate in the eastern Afghan city of Jalalabad, killing three people in the latest in a string of assaults on Indian installations in the country.

No group has so far claimed the brazen attack, which coincided with a NATO change-of-command ceremony that saw U.S. army general John Nicholson take charge of international troops in Afghanistan. Indian diplomats were not hurt, the foreign ministry in New Delhi said, after a suicide bomber blew himself up at the consulate’s entrance and four other attackers breached the compound.

“All four of them were killed by our security forces,” government spokesman Attaullah Khogyani told AFP after the two-hour assault ended. “Three others—two civilians and one policeman—were killed and 19 other people were left wounded.”

The powerful explosion sent a column of smoke rising in the sky and blew out windows of nearby buildings, as Afghan troops hauled away bodies from the area littered with charred debris. The attack highlights the worsening security situation in Afghanistan as Taliban insurgents step up nationwide attacks and Islamic State jihadists make inroads in the volatile east.

“There is still much work to be done. We now find ourselves at an inflection point in our campaign,” outgoing NATO commander General John Campbell told reporters in Kabul. “[Afghan security forces] have come far but they still need our help. [Their] desire to improve and their resilience warrants our continued support in the critical years ahead.”

Wednesday’s assault was reminiscent of a 25-hour gun and bomb siege near the Indian consulate in the northern city of Mazar-i-Sharif in January. India has been a key supporter of Kabul’s post-Taliban government, and analysts have often pointed to the threat of a “proxy war” in Afghanistan between India and Pakistan.

Pakistan has long been accused of assisting the insurgents, especially with attacks on Indian targets in Afghanistan, but denies the claims.

Direct peace talks are expected to start this week in Islamabad between the Western-backed Afghan government and the Taliban, which has been waging a deadly insurgency for more than 14 years. Delegates from Afghanistan, China, the U.S. and Pakistan recently met in Kabul for a fourth round of talks aimed at paving the way for the nascent peace process. But the Taliban have intensified their insurgency in an apparent attempt to gain leverage before the planned negotiations.

Nangarhar province, of which Jalalabad is the capital, also faces an emerging threat from loyalists of the Islamic State group, which controls territory across Syria and Iraq and is making gradual inroads in Afghanistan—challenging the Taliban on their own turf. The jihadists have managed to attract disaffected Taliban fighters increasingly lured by the group’s signature brutality.

In January I.S. fighters claimed responsibility for a deadly gun and bomb siege of the Pakistani consulate in Jalalabad, the first major attack by the group in an Afghan city. The violence tearing the country apart is having a devastating impact on Afghan civilians.

A recent U.N. report highlighted more than 11,000 civilian casualties in 2015 including 3,545 deaths, a new record since 2009 when the agency began tabulating the statistics.