Millions On Strike in India Over ‘Anti-Labor’ Reforms 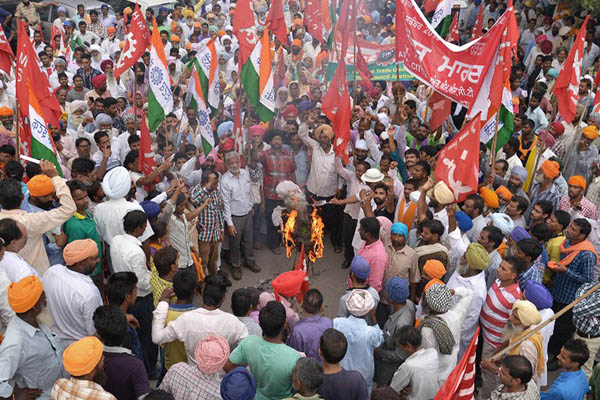 Protesters claim planned labor reforms would make it much easier to dismiss workers and shut down factories, affecting job security.

Millions of workers across India went on strike Wednesday in protest at Narendra Modi’s economic policies, the biggest show of strength by trade unions since the rightwing prime minister took office.

The protesters claim labor law reforms planned by Modi’s government will put jobs at risk, and are demanding it scrap changes that would make it easier to lay off workers and shut down unproductive factories. All India Trade Union Congress secretary Gurudas Dasgupta said the response had been “magnificent” and estimated over 150 million workers participated in the strike, although this could not be independently confirmed.

The strike—the biggest in India for more than two years—included staff at state-run banks and mines as well as factory, construction and transport workers.

“This strike is a reminder to the government that it must consult the millions of employees [affected] before changing the labor laws,” striking bank worker Amit Khanna told AFP in New Delhi.

Most cities remained peaceful, but clashes between police and activists broke out in the eastern state of West Bengal, which has a long history of union activism. Television footage showed police baton-charge protesters in state capital Kolkata and drag away women strikers who had staged a sit-in, while protesters threw stones and smashed vehicles.

Banks, shops and other businesses remained closed in the city, stranding commuters and travelers at the main station, while dozens of flag-waving protesters halted suburban trains.

In New Delhi, long queues formed at bus stops early Wednesday, while passengers were stranded at airports as taxis and rickshaws stayed off the streets. Some protesters forced auto-rickshaw and taxi drivers off the roads and vandalized their vehicles.

“I told them [strikers] that I am going to the hospital, but these people said ‘there’s a strike today’ and beat me up,” an auto-rickshaw driver in New Delhi told TV reporters as he stood in front of his damaged yellow and green vehicle.

Modi has promised a string of business-friendly reforms to attract foreign investment and revive Asia’s third-largest economy. His government wants to simplify India’s myriad of sometimes archaic labor laws, which date back to the British Raj, and create into a single code for industry.

Businesses argue that conforming to India’s 44 national and more than 150 state labor laws is not only costly and time-consuming, but has also deterred foreign investors. Current laws require companies to keep numerous records for inspection and file reports on attendance, overtime and sick leave, while others say factories must have a sufficient number of spittoons and washroom walls should be whitewashed regularly.

The government’s proposals would make it easier for firms with 300 or more workers to fire employees and make it more difficult to create new unions.

Although trade unions agree reforms are overdue, they oppose the bills, saying they would leave workers with less job security while the level of legal protection on pay and other conditions would be reduced.

The bills have also come up against opposition in the upper house of parliament where the government does not have a majority.

The unions went ahead with the 24-hour strike after talks with Finance Minister Arun Jaitley broke down. Last month they demanded the government improve social security measures and set a national minimum wage of 15,000 rupees, up from current state set standards that range from 5,000 to 9,000 rupees.

India’s economy grew by a slower than expected 7.0 percent in the first quarter of the financial year and experts say reforms are needed to create jobs for millions of young people. Previous strikes have shut down cities and cost the Indian economy millions of dollars in lost production.

The most unproductive government owned banks, airline and factories, must be closed. Why should the tax payers pay for their laziness, absentism and ineffeciencies ( and corruption).
Would anyone of these people pay for a cook, maid, plumber, electrician- who is rude and never does much work, but expects higher wages!!
Get rid of them.