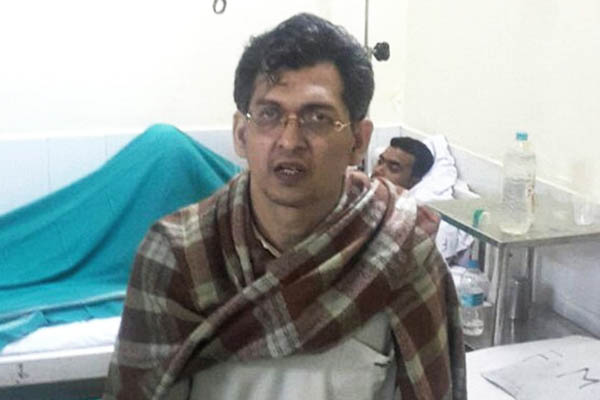 Salahuddin Ahmed says he has no idea how he wound up in neighboring country after being abducted from his home two months ago.

Police in India have detained the chief spokesman of Bangladesh’s main opposition party after he was found wandering in a disorientated state near the border, more than two months after he went missing in an alleged abduction.

Salahuddin Ahmed, a former minister for the Bangladesh Nationalist Party, said that he had been snatched in his home country back in March 10 but had no idea how he had come to surface in the Indian state of Meghalaya.

“I was kidnapped by a group of unidentified people from Uttara [a district in Dhaka] but I do not know how I landed in this place,” he said in brief comments on Tuesday before being led away to a prison cell in the state capital Shillong.

Ahmed’s mysterious disappearance at the height of deadly anti-government protests in early March sparked widespread allegations that he had been secretly taken into custody by intelligence agents. His fate had become a growing source of tension between the opposition and government of Prime Minister Sheikh Hasina, with her administration insisting that it knew nothing about what had happened to him or of his whereabouts.

Police in Meghalaya said that Ahmed had been picked up near a golf course on Monday morning after being alerted by the public “about the suspicious movement of an individual” and then brought in for questioning. “When police officers questioned him, they found that he was not speaking comprehensibly. Hence, we referred him to MIMHANS,” said local police official M. Kharkrang, referring to a local mental health facility. “However, he was found to be mentally sound.”

An official at MIMHANS, speaking anonymously, confirmed that Ahmed had been kept under observation before transferred to a general hospital suffering from unspecified “physical problems” where he was later formally arrested over suspicions of illegally entering the country.

Speaking to AFP in Dhaka, Ahmed’s wife said she had received a phone call from her husband. “The hospital authorities called me just a moment ago and then I spoke to my husband,” said Hasina Ahmed. She could not describe the circumstances that led to Ahmed’s disappearance from a hideout in Dhaka nor of his re-emergence in India.

Ahmed took over as the BNP’s chief spokesman after two other senior party members were detained in January at the start of a campaign of anti-government protests. Hasina Ahmed said a member of the country’s elite security force picked up her husband from a hideout in Dhaka. But police and the government always denied that he was in their custody.

From the hideout, Ahmed had issued a series of hard-hitting anti-government statements, urging people to join the months-long transport blockade—called by BNP leader Khaleda Zia—aimed at toppling the government.

Zia, who is a two time former prime minister, has accused the security agencies of keeping Ahmed in their custody and demanded his immediate release.

Bangladesh has been plagued by unrest for the last two years and has a long history of deadly political violence. Scores of people have been killed in firebomb attacks on vehicles since Zia called the blockade.