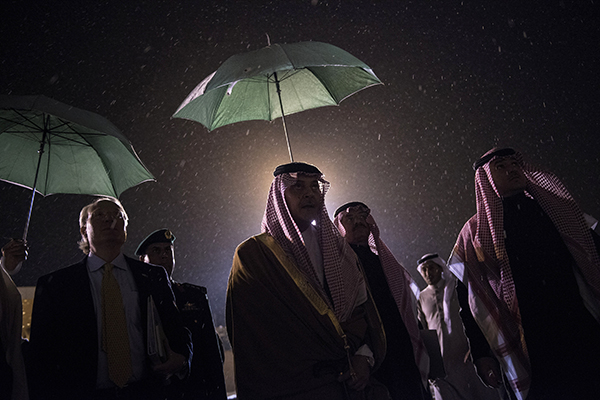 Saudi Arabia has strong reservations about attempts by Washington and other major powers to negotiate a deal with Iran on its nuclear program, and disappointment over Obama’s 11th-hour decision last year not to take military action against the Syrian regime.

Saudi-U.S. relations, dating back seven decades, are “tense due to Washington’s stances” on the Middle East, especially Iran, said Saudi analyst Abdel Aziz al-Sagr, who heads the Gulf Research Center. The recent rapprochement between Tehran and Washington “must not take place at the expense of relations with Riyadh,” said Sagr.

Sunni Muslim Saudi Arabia, long wary of Shia Iran’s regional ambitions, views the November deal with Iran as a risky venture that could embolden Tehran. The interim agreement curbs Iran’s controversial nuclear activities in exchange for limited sanctions relief, and is aimed at buying time to negotiate a comprehensive accord. Sagr said “arming the Syrian opposition will top the agenda” during Obama’s visit, his second since his election in 2009.

Analyst Khaled al-Dakhil spoke of “major differences” with Washington, adding that Obama will focus on easing “Saudi fears on Iran and on regional security.”

Saudi Arabia, which leads the six-nation Gulf Cooperation Council, fears that a U.S. withdrawal from the Middle East and a diplomatic overture toward Iran would further feed Tehran’s regional ambitions. Iranian-Saudi rivalry crystallized with the Syrian conflict: Tehran backs President Bashar al-Assad’s regime and several GCC states support the rebellion against him.

Obama’s stances toward events reshaping the region “have strained [Saudi-U.S.] relations but without causing a complete break,” said Anwar Eshki, head of the Jeddah-based Middle East Center for Strategic and Legal Studies. U.S. security and energy specialist Prof. Paul Sullivan said Obama meeting Abdullah could “help clear the air on some misunderstandings.” He added: “However, I would be quite surprised if there were any major policy changes during this visit. This is also partly a reassurance visit.”

White House spokesman Jay Carney has said that “whatever differences we may have do not alter the fact that this is a very important and close partnership.”

However, Riyadh seems to be reaching out more toward Asia, including China, in an apparent bid to rebalance its international relations. Crown Prince Salman bin Abdulaziz this month visited China, Pakistan, Japan, and India to “strengthen ties.”

The U.S.-Saudi relationship dates to the end of World War II and was founded on an agreement for Washington to defend the Gulf state in exchange for oil contracts. OPEC kingpin Saudi Arabia is the world’s top producer and exporter of oil.

Obama and the king are also expected to discuss deadlocked U.S.-brokered Israeli-Palestinian peace talks. They will also discuss Egypt, another bone of contention since the 2011 uprising which ousted Hosni Mubarak, a staunch U.S. and Saudi ally. The kingdom was dismayed by the partial freezing of U.S. aid to Egypt, whose Army toppled president Mohamed Morsi in July—a move hailed by Riyadh. Egypt’s Field Marshal Abdel Fattah al-Sisi resigned as defense minister Thursday after announcing he would stand for president.

Dozens of U.S. lawmakers in a letter to Obama have also urged him to publicly address Saudi Arabia’s “systematic human rights violations,” including efforts by women activists to challenge its ban on female drivers.