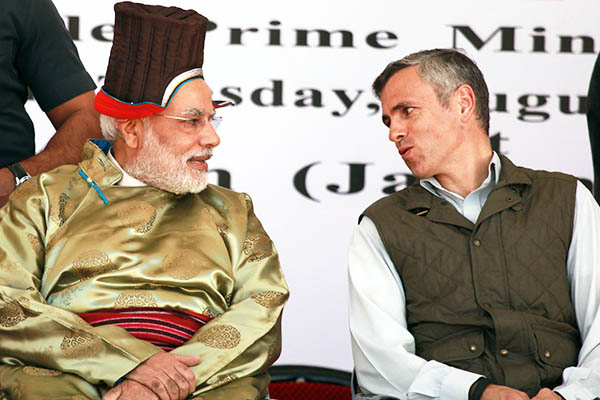 Narendra Modi accused Pakistan on Tuesday of waging a “proxy war” in Kashmir, as he became the first Indian prime minister in nine years to visit Kargil, scene of a deadly 1999 conflict.

Modi landed in the remote Himalayan town a day after India and Pakistan traded charges of ceasefire violations on their border in Kashmir. A Pakistan Army incursion in the Kargil area 15 years ago triggered a conflict between the two countries that killed more than 1,000 on both sides. The then-prime minister Manmohan Singh visited the town in 2005.

Since 1999, India has maintained a heavy military presence in Muslim-majority Kargil in the Ladakh region. But there were few soldiers on the streets of Kargil on Tuesday.

“Today, when I came, I heard the cheerful claps of the people,” Modi told a 5,000-strong crowd in the town festooned with flags bearing logos of his Hindu nationalist Bharatiya Janata Party. “I had also come at a time when the place was echoing with the noises of bombs and bullets,” he said, recalling a visit he made to Kargil before becoming premier.

Some 300 refugees from Indian-administered Kashmir burnt an Indian flag in Muzaffarabad, the capital of the Pakistan-administered zone of the divided Himalayan state. “We are protesting against the visit of Indian prime minister to Kashmir and strongly condemn his anti-Pakistan remarks,” said Uzair Ghazali, leading the protesters.

In Indian-administered Kashmir, Abdul Hanie, 30, said locals had high hopes from Modi who took power in May after years of what he said was neglect by the previous national government. “He really seems like he’s talking about real things, like an airport and tunnel to the Kashmir valley,” said Hanie, a resident of Kargil, often cut off in the harsh winter. “At least he came here as the first step. I am hopeful things will change for us, particularly during winters,” added Zainab Khatoon, who attended the event with her baby son.

Speaking earlier to soldiers in Leh, capital of the Ladakh region, Modi condemned what he called a “proxy war by Pakistan.” He said troops were “suffering more casualties from terrorism than from war,” according to the government’s Press Information Bureau website.

New Delhi has long accused Islamabad of using Pakistan-based militant groups such as the outlawed Lashkar-e-Taiba against its forces in Kashmir—a claim Islamabad denies.

Ajai Sahni, executive director at the Institute of Conflict Management think-tank, said Modi’s visit was an “important first step towards bringing these areas back to the center of national and strategic consciousness.”

“This government’s initiative in the region will gradually shift the power equation in favor of India over Pakistan as people in the region become more integrated [with India] with development and progress,” he predicted.

Modi had been reportedly planning to visit Kashmir’s Siachen glacier, dubbed the world’s highest battlefield due to a long-running territorial dispute, but officials said he would not now do so, without giving a reason. An estimated 8,000 troops have died on the glacier since 1984, almost all of them from avalanches, landslides, frostbite, altitude sickness or heart failure rather than combat.

The nuclear-armed rivals fought over Siachen in 1987, though guns on the glacier have largely fallen silent since a peace process began in 2004.

Modi’s visit came a day after Pakistan summoned a senior Indian diplomat over a cross-border firing incident near Sialkot at the foot of the Kashmir hills, which the foreign ministry said killed at least one civilian.

Earlier, Indian police accused Pakistan of injuring four people during firing along their border in Kashmir. New Delhi and Islamabad agreed a ceasefire in 2003 but firing along the disputed de facto border called the Line of Control, which separates Kashmir into Indian and Pakistani sectors, still occurs sporadically.