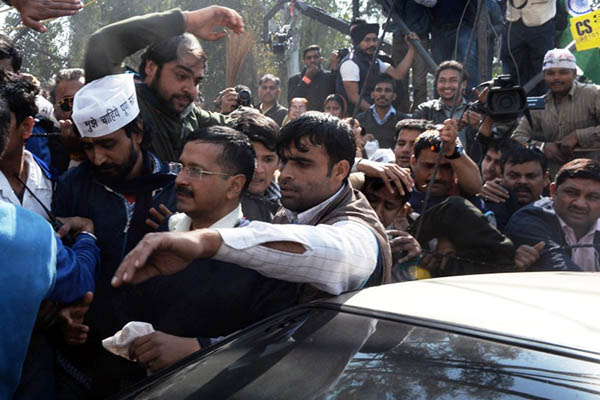 Arvind Kejriwal’s Aam Aadmi Party is leading in 66 of the 70 seats in the state assembly.

“Spoke to @ArvindKejriwal & congratulated him on the win. Assured him Center’s complete support in the development of Delhi,” Modi said in a tweet.

Kejriwal’s victory marks a stunning comeback for the anti-graft champion and self-styled anarchist, who resigned following a chaotic 49-day spell in charge of the Delhi state government a year ago.

After apologizing for leaving voters without an elected government for a year, Kejriwal was the star of the campaign, outshining former policewoman Kiran Bedi who was the BJP’s pick for chief minister. Rattled by Kejriwal’s popularity, Modi headlined several major rallies, portraying his rival as a “backstabber” who betrayed voters last time round by quitting so early.

But observers say the BJP’s local chapter ran a poor campaign, while Kejriwal’s pledges such as cheaper utility bills won over legions of voters willing to give him a second chance.

Congress, which has dominated politics since India’s independence, was suffering another mauling after being thumped at the general elections, leading in no seats as vote counting continued.

Thousands of AAP supporters massed outside the party’s headquarters in Delhi, dancing, singing and waving flags with pictures of former tax official Kejriwal while chanting his name. The win is particularly sweet for Kejriwal, who was trounced by Modi when they battled for the same seat at the general elections. The AAP won only four seats nationally.

Observers say the defeat is a blow for a prime minister who has enjoyed an extended honeymoon with voters since his landslide general elections victory. A BJP spokesman said the results were not a sign of anti-Modi sentiment and that the election had been fought on local issues.

“There is not an iota of negativity against the NDA [national] government anywhere in the country let alone in Delhi,” spokesman GVL Narasimha Rao told NDTV ahead of Modi’s tweet. “There is a local election where local factors dominated.”

The loss is a setback to Modi’s efforts to consolidate power in the national parliament to push through promised economic reforms.

The BJP has won a string of state polls since the general elections, mostly on the back of Modi’s popularity. Modi needs to win state elections to gain control of both houses of parliament, where he is attempting to push through reforms on land acquisition, tax and other issues to revive the economy.

States are allocated seats in the nation’s upper house, where the BJP does not have a majority.

Kejriwal famously declared himself an anarchist during his brief tenure last year and staged several street protests outside government offices. After winning plaudits for taking the metro to his inauguration, his administration lost its sheen, with a raid on a largely African neighborhood sparking claims of racism. But Kejriwal won Delhi voters round with campaign promises such as free wifi for the capital’s 17 million residents, as well as pledges to counter corruption.