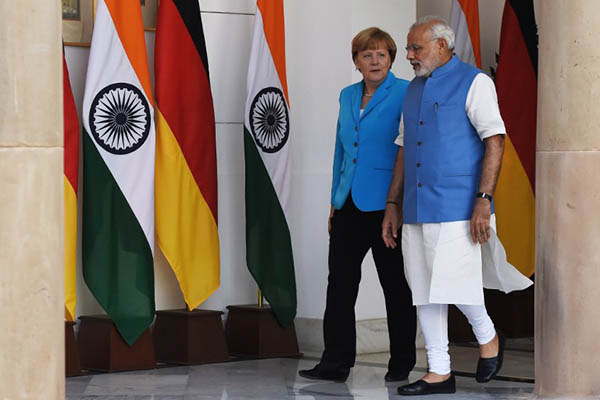 Indian P.M. says his country see Germany as a natural partner for its economic transformation.

Narendra Modi on Monday hailed Germany as a “natural partner” of India after signing deals with Angela Merkel on clean energy and speeding up the European powerhouse’s investment in Asia’s third largest economy.

The German chancellor held lengthy talks with the Indian prime minister on her first trip to New Delhi since Modi’s rightwing party stormed to power in May 2014 promising to reform and revive the economy. Briefly leaving behind a refugee crisis in Europe, Merkel and her ministers signed 18 deals with India’s government, including on renewable energy and fast-tracking approvals for German companies to operate in India.

“We see Germany as a natural partner in achieving our vision of India’s economic transformation. German strengths and India’s priorities are aligned,” Modi said after meetings lasting three hours with Merkel, who arrived in the capital on Sunday.

Foreign companies have long despaired at India’s levels of taxation, corruption and other obstacles to doing business. But many have welcomed Modi’s efforts to make it a faster and more reliable place to invest.

“Energy cooperation is very much in the foreground, particularly exploring and developing rural areas is very much on our agenda,” Merkel said, standing alongside Modi.

India, the world’s third largest emitter of greenhouse gases, has pledged to generate 40 percent of its electricity from renewable sources within 15 years as part of its action plan for the upcoming talks in Paris. But New Delhi has rejected calls to curb its heavy reliance on coal for power, instead calling on industrialized countries to bear the burden of curbing emissions.

Germany is already India’s most important trading partner in Europe and both Modi and Merkel have said they are keen to increase trade.

“A reliable legal and administrative framework is indispensable for German companies in India,” he said in an interview with the Hindustan Times before the talks, while applauding Modi’s government for moving in the right direction.

Merkel welcomed the fast-track approval agreement signed on Monday, which will ensure German companies have a single point of contact with the Indian government, to avoid its notorious layers of bureaucracy. “I was very glad we were able to sign the fast-track agreement today so that the speed with which you provide licenses to companies to set up business is increased,” she said.

“There was an understanding that we would go forward with the negotiations,” Indian Foreign Secretary S. Jaishankar told reporters. A stumbling block to talks progressing was the E.U.’s “unwarranted” decision to suspend from sale about 700 Indian drugs, he said, adding that India wanted the E.U. to look at the issue “fairly and sensibly.”

German investments in India stand at 9.7 billion euros with about 1,600 companies in the country, where the chemistry, energy and pharmaceuticals sectors are of greatest interest.

The leaders met in April on Modi’s first official visit to Germany, where the Indian premier sought more investment as he intensifies his drive to make India a manufacturing hub.

Among the deals signed on Monday, Germany agreed to lend India some of the vocational education expertise that has turned it into an engineering giant, with skilled workers crucial for Modi’s “Make in India” campaign. “We can look forward with confidence to increased investment, trade and technology partnerships in manufacturing, infrastructure and skill development,” Modi said.

Merkel and her delegation of cabinet ministers and German business leaders will resume talks with Modi on Tuesday when they attend a business forum in the southern technology hub of Bangalore. The German leader leaves later the same day.