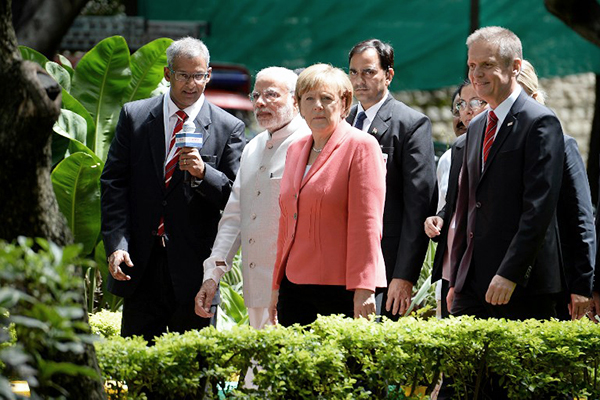 Indian P.M. claims his government has turned India into an ‘easy place’ to do business.

Prime Minister Narendra Modi urged German companies Tuesday to do business in India and promised tax and other economic reforms, on the final day of Chancellor Angela Merkel’s visit.

After the leaders toured a German engineering factory in India’s technology hub of Bangalore, Modi called on the European powerhouse to invest in Asia’s third largest economy to provide jobs for millions of young people. “We have worked aggressively in the last 15 months to make India an easy place to do business,” Modi said alongside Merkel.

The two leaders held lengthy talks in New Delhi on Monday during the chancellor’s first visit to India since Modi’s rightwing party stormed to power in May 2014 promising to reform and revive the economy. Germany pledged more than one billion euros in Indian solar power projects on Monday, as the countries signed a series of deals aimed at expanding trade.

India, the world’s third largest emitter of greenhouse gases, has promised to generate 40 percent of its electricity from renewable sources within 15 years as part of its action plan for upcoming climate change talks in Paris. In Bangalore, Modi singled out his government’s push to turn India into a manufacturing hub, saying it had fast-tracked clearances for foreign companies to set up shop in the world’s second most populous country.

“One of the biggest challenges in India today is to productively employ our youth,” Modi told German and Indian business leaders at a forum in the southern city. Modi said he hoped to introduce a long-awaited national sales tax in 2016 to replace a myriad of overlapping state and national duties.

The Goods and Services Tax along with several other economic reforms have been stuck in parliament, where Modi’s party lacks a majority in the upper house.

Foreign companies have long despaired at India’s levels of taxation, corruption and other obstacles to doing business. But many have welcomed Modi’s efforts to make it a faster and more reliable place to invest. Modi and Merkel toured a Bosch factory in Bangalore, as company executives said they plan to invest 6.5 billion rupees in India this year.