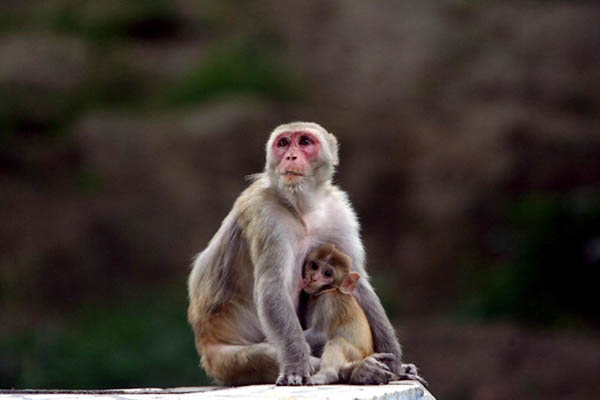 Indian officials on Tuesday urged tourists to steer clear of monkeys after two French visitors were attacked by apes while taking selfies at the Taj Mahal.

The tourists were left with bloody scratches and bite marks after being chased and set upon by the monkeys as they took photos at India’s most famous attraction.

Footage captured on a mobile phone showed scores of monkeys chasing tourists from the legendary monument to love in the city of Agra early Tuesday.

Tourist police officer R. V. Panday told AFP the international visitors were given first aid after being attacked. “They were taking selfies in front of the Taj when a group of monkeys attacked them,” Panday said.

Hordes of monkeys roam the vast Taj complex and authorities have struggled to stop them harassing visitors.

Panday advised tourists to avoid the monkeys and refrain from feeding them, adding the cheeky primates were known to snatch food and other items from unsuspecting visitors.

Last year a tourist was injured after she tried to retrieve her purse from a monkey at the Taj.

India has an estimated monkey population of 50 million and roughly 10,000 are believed to roam Agra. They are fed by Hindus who revere the monkey god Hanuman, but their numbers are difficult to contain.

Nationwide figures are not available but nearly 1,900 people were bitten by monkeys in the capital New Delhi in 2016, government figures show.