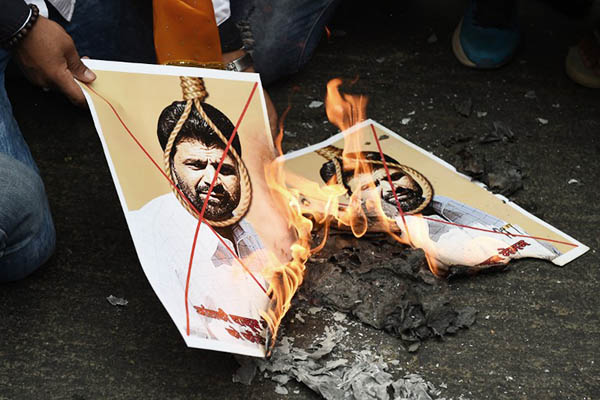 Yakub Memon was executed on his birthday after the Supreme Court and India’s president rejected his pleas for clemency.

India on Thursday executed convicted bomb plotter Yakub Memon for his role in a series of coordinated attacks that killed hundreds of people in Mumbai in 1993, Indian media reported.

Memon was hanged at Nagpur jail in the western state of Maharashtra around 7:00 a.m. on the day of his 53rd birthday, according to the NDTV and CNN-IBN news channels, after last-ditch pleas for clemency were rejected by India’s president and supreme court. The Press Trust of India (PTI) news agency also reported the execution, citing officials.

PTI said that Memon’s body was due to be handed over to his family, adding that Maharashtra Chief Minister Devendra Fadnavis was expected to make a statement to the state assembly later Thursday.

The Bombay Stock Exchange, the offices of Air India and a luxury hotel were among about a dozen targets of the March 1993 blasts, which killed 257 people in the deadliest attacks ever to hit India. They were believed to have been staged by Mumbai’s Muslim-dominated underworld in retaliation for anti-Muslim violence that had killed more than 1,000 people.

Security was tightened near the targets in Mumbai on Thursday.

Memon, a former accountant by profession, was the only one of 11 people convicted over the atrocity to have his death sentence upheld on appeal. The sentences on the others were commuted to life imprisonment. He has denied any involvement in the blasts during a staggered trial and appeal process that has bitterly divided opinion in India and led to calls from rights activists and an ex-judge for his life to be spared.

Former Supreme Court judge Harjit Singh Bedi had said the Supreme Court should take notice of reports that Memon had cooperated with investigators and returned voluntarily from Pakistan, where he fled after the blasts. Others pointed out that his brother Tiger Memon was alleged to have masterminded the attacks, along with Mumbai gang boss Dawood Ibrahim. Both have been on the run since 1993.

Memon and two other brothers were convicted in 2006 by a specially designated court, using controversial anti-terror legislation that was introduced after the attacks that is no longer on the statute books.

Executions are only rarely carried out in India, but President Pranab Mukherjee has rejected a number of mercy pleas in the past three years, ending a de facto eight-year moratorium. The lone surviving gunman from the 2008 Mumbai attacks was hanged in 2012, while a Kashmiri separatist was executed in New Delhi the following year after being convicted of involvement in a deadly 2001 attack on the Indian parliament.

The Memon family left for Dubai in the days before the 1993 bombings, but all except Tiger were arrested when they returned to India the following year.

Eight members were charged over the attacks, all of whom denied any role in the atrocity. Memon’s father died during the long-running legal proceedings, three were acquitted and three others are serving life in prison, including Yakub’s sister-in-law Rubina Memon.

Amnesty India said before Yakub’s execution it was disappointed by the decision to go ahead with the hangings. “The judgment regrettably puts India in opposition to the global trend toward moving away from the death penalty,” the rights group said.

The attack also embroiled Bollywood star Sanjay Dutt, who is serving a prison sentence for buying weapons from gangsters accused of orchestrating the bombings.

Memon was convicted by a specially designated court under the draconian Terrorist and Disruptive Activities (Prevention) Act, which was promulgated immediately after the 1993 bomb blasts. The act lapsed two years later and was never revived, after activists accused the government of using it to harass Muslims.