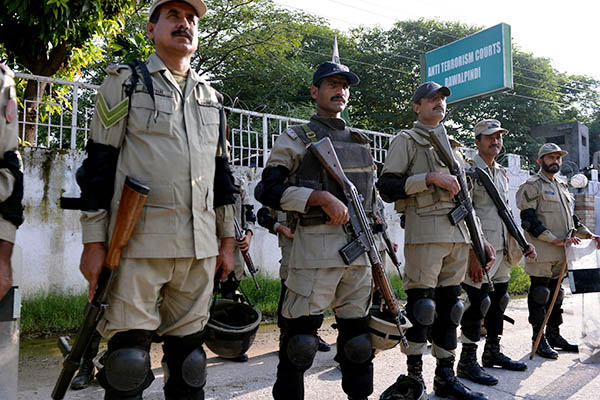 Former Pakistan president Pervez Musharraf was indicted on Tuesday on three counts over the murder of opposition leader Benazir Bhutto who died in a gun and suicide attack in December 2007.

Bringing charges against a former Army chief is an unprecedented move in a country ruled for more than half of its life by the military, which is considered the single most powerful institution. It is one of a series of cases that Musharraf has faced since returning from self-imposed exile earlier this year. He seized power in a bloodless coup in 1999 and was forced out in 2008.

“He was charged with murder, criminal conspiracy for murder and facilitation for murder,” said public prosecutor Chaudhry Azhar at the anti-terrorism court in Rawalpindi hearing the case.

Musharraf, 69, who was bundled into the court amid high security, denied the charges and the case was adjourned until Aug. 27. He has been under house arrest at his villa on the edge of the capital Islamabad since April 19.

Officials had said threats against his life were too severe earlier this month for him to appear in court to face the charges.

“The charges were read out to him in the court. He denied the charges,” said Azhar. “The case has been adjourned until Aug. 27 for evidence to be brought,” he added.

“These charges are baseless. We are not afraid of the proceedings. We will follow legal procedures in the court,” said his lawyer Syeda Afshan Adil.

Scores of security forces guarded the area around the court in Rawalpindi, the city where Bhutto was killed on Dec. 27, 2007, and roads were sealed off for Musharraf’s appearance.

The indictment follows lingering speculation about the possibility of a behind-the-scenes deal that could allow Musharraf to leave Pakistan without facing the courts and embarrassing the military.

The Bhutto case is one in a series of court battles that Musharraf has faced over allegations dating back to his 1999-2008 rule, since he returned in March from four years of self-imposed exile to contest the May elections won by Nawaz Sharif’s Pakistan Muslim League (Nawaz).

The new government headed by Sharif, whom Musharraf deposed in 1999, has said he should stand trial for treason for subverting the Constitution and has appointed a committee to investigate him. The offence carries the death penalty or life imprisonment. Musharraf is also wanted over the death of Balochistan rebel leader Nawab Akbar Bugti during a military operation in 2006.

Amnesty International has demanded that Pakistan hold Musharraf accountable for all rights violations committed during his rule.