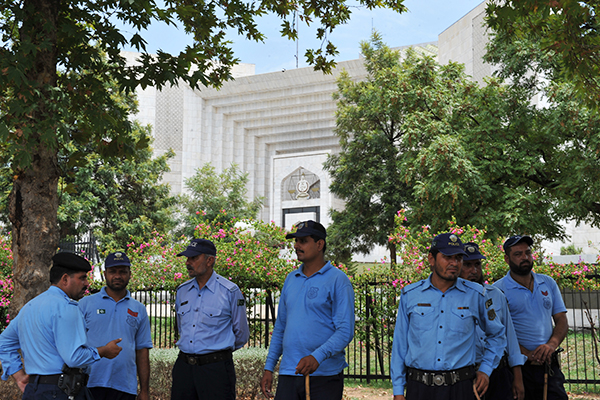 The accountability organization hits out at smear campaign.

The National Accountability Bureau has warned the press against attempting to influence its proceedings and under-trial cases by airing and publishing disinformation.

“While acknowledging the right of the media to inform and educate the public, NAB has taken a serious view of a consistent and concerted campaign by a section of the media aimed at tarnishing the image of this institution as well as its leadership,” the organization said in a statement released on Sept. 11.

The strongly worded press release follows repeated claims—on ARY News and in the Roznama Dunya, in particular—alleging that NAB collusively removed the names of two persons from the case against Tauqir Sadiq, former chairman of the Oil and Gas Regulatory Authority. The two persons are Dr. Asim Hussain, former federal minister for petroleum and natural resources, and the chairman of Jamshoro Joint Venture Limited.

“NAB is conscious of the fact that vested interests on the wrong side of the law would not be happy with NAB,” says the press release, “However, it is disappointing to note [that some] irresponsible individuals are misusing their status as members of the journalist community.”

“Ordinarily, NAB would not dignify such malicious and biased contents with comment nor would it discuss individual cases in media,” the statement continues, “However, in view of the malicious campaign being unleashed against the person of the present chairman as well as NAB itself in the case of OGRA where the reference is sub judice in an Accountability Court, Islamabad, NAB is constrained to put the record straight.”

“It has been alleged that the names of the two accused were illegally deleted from the reference by the present chairman. Nothing can be further from the truth. NAB believes that this allegation is an attempt to influence the conduct of trial in Accountability Court. Without prejudice to the right to seek appropriate legal remedy, NAB wishes to place on record the following facts:

“The fact of the matter is that during the course of the investigation, certain individuals were alleged to have committed and facilitated the usage of unmetered gas allegedly covered up under the umbrella of Unaccounted-for Gas (UFG). The verification process necessitated a visit to the site in Jamshoro. A three-member team comprising of one senior director, one senior prosecutor, and the investigation officer, Mr. Waqas Ahmed Khan, visited the [Sui Southern Gas Company Limited]/JJVL site at Jamshoro, Sindh. The committee physically inspected the site under the control of SSGC, recorded statements of the officials and on the basis of this evidence found that no case could be made out against these individuals. It was on the basis of this physical visit/verification report that the investigation officer did not proceed against these individuals.

“The two reports prepared by the same investigation officer, Mr. Khan, depicted the pre-visit and post-visit factual position on ground, respectively. It may also be noted that the same matter was examined by the highest judicial forum, i.e., the Supreme Court of Pakistan, and the reference by NAB in the Accountability Court was upheld.

“It is [thus] expected that no further mischievous and speculative stories on the matter be raised so that the trial meets its fair and logical conclusion. NAB wishes to assert that its conduct and actions are subject to the test of judicial scrutiny. It will continue to discharge its legal mandate and responsibility undeterred by any such malicious and baseless propaganda.”