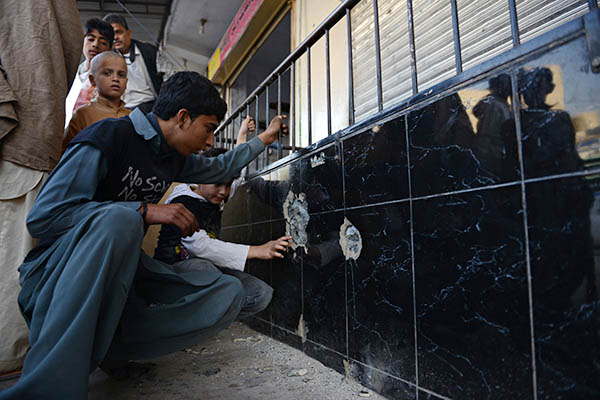 The site of Nasiruddin Haqqani’s killing in Islamabad. Farooq Naeem—AFP

The chief financier of the militant Haqqani network—one of the most feared groups fighting U.S.-led forces in Afghanistan—was shot dead in Pakistan’s capital, the Taliban said Monday. Unidentified gunmen attacked Nasiruddin Haqqani, a son of the group’s founder, on the edge of Islamabad on Sunday evening, said the militants.

Eyewitnesses described attackers on motorbikes spraying Haqqani with automatic gunfire as he bought bread from a shop in Bhara Kahu on the northeastern edge of the city. There was no immediate claim of responsibility for the killing, which comes just over a week after a U.S. drone strike killed Pakistani Taliban chief Hakimullah Mehsud in North Waziristan.

“I can confirm that Nasiruddin Haqqani, 36, was shot dead in Islamabad’s Bhara Kahu area on Sunday night. At least four gunmen opened fire on him,” said a senior Afghan Taliban source from the Haqqani network. Haqqani’s body has been taken to Miranshah, North Waziristan, for burial, the source said.

Another Taliban source said Haqqani owned a house in Bhara Kahu, where neighbors—who knew him as “doctor sahib”—had been told he was a car dealer. “We were not aware that such an important commander had been living in the neighborhood,” said resident Haji Naseer.

Mohammad Ahmad, the owner of a nearby auto shop, said he heard one shot initially, then “indiscriminate firing.” “When the firing stopped, I came out and I saw a tall person bleeding and lying on the ground. He had long hair and long beard like a mullah,” he said.

A spokesman for the Pakistani Taliban confirmed the death and vowed to take revenge, accusing Pakistan’s Inter-Services Intelligence agency of killing him. “Nasiruddin Haqqani has been martyred by ISI,” said Shahidullah Shahid, the main spokesman for the Tehreek-e-Taliban Pakistan. “He was killed because he bravely supported Taliban chief Hakimullah Mehsud.”

Afghanistan’s NDS spy agency also confirmed Haqqani’s death, but blamed it on an “internal conflict.” It did not give further details.

The Haqqanis have been blamed for spectacular attacks on Afghan government and NATO targets across Afghanistan, as well as for kidnappings and murders. Washington holds the Haqqanis responsible for some of the most high profile attacks in Afghanistan, including a 2011 siege of the U.S. embassy and, in 2009, the deadliest attack on the CIA in 25 years.

The U.S. put the Haqqani network on its terror blacklist in September 2012, and the Pentagon said the group represented a “significant threat” to national security. The U.N. followed up with global sanctions on the network two months later, saying in its designation that the group was linked to Al Qaeda, the Islamic Movement of Uzbekistan and a string of militant groups in Pakistan, including the Tehreek-e-Taliban. The Haqqanis have been a source of friction in U.S.-Pakistan relations. In 2011, the then U.S. military chief, Adm. Mike Mullen, called the group a “veritable arm” of the ISI.

A 2012 study by the Combating Terrorism Center at U.S. military academy West Point described Nasiruddin as the Haqqanis’ “chief financial officer.” It described a formidable business network supporting the Haqqanis’ military operations, with funds flowing from real estate and Gulf donations as well as illicit sources such as extortion, kidnapping, and smuggling. Nasiruddin was believed to direct smuggling operations and receive large payments from companies seeking to work in Haqqani-controlled lands, the study said.

The network was founded by Nasirudddin’s father, Jalaluddin Haqqani—a disciplined Afghan guerrilla leader bankrolled by the United States to fight Soviet troops in Afghanistan in the 1980s. When American troops arrived after the 9/11 attacks, Jalaluddin sought refuge in North Waziristan and became one of the first anti-U.S. commanders based in Pakistan’s border areas.

The network has training bases in eastern Afghanistan and is close to Al Qaeda. Its fighters are active across east and southeast Afghanistan and in Kabul. It is also militarily the most capable of the Afghan Taliban factions. It operates independently but remains loyal to Mullah Omar. Jalaluddin, now in his late 70s and frail, has ceded his seat on the Afghan Taliban leadership to another son, Sirajuddin, who runs at least 2,000 men.