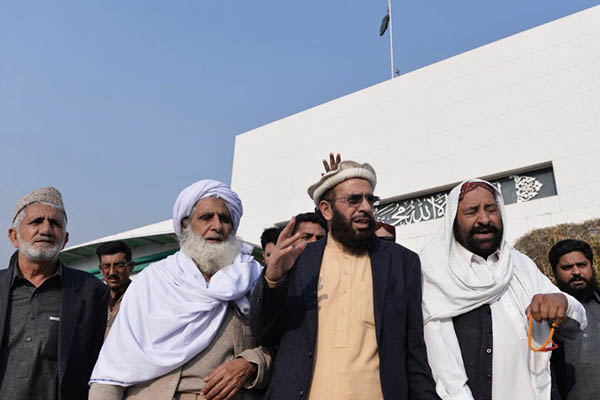 The parliamentary resolution, which also criticized Western media for reprinting the caricatures, comes a week after Islamabad labeled the deadly raid on the French magazine’s offices as a “brutal terror attack.”

The satirical magazine this week published a “survivors” issue with an image of Islam’s Prophet weeping on the cover, which sold out before more copies of an eventual print run of five million hit newsstands in France.

“This House strongly condemns [the] printing and reprinting of the blasphemous caricatures,” the Parliament resolution said, adding that lawmakers take “serious note of the continued trend of their reproduction in numerous other newspapers and magazines of other Western capitals.”

“This House genuinely believes that freedom of expression should not be misused as a means to attack or hurt public sentiments and religious beliefs.”

Hundreds of protesters held rallies in Lahore and Quetta on Thursday, while dozens of activists in Multan burnt the French flag.

Blasphemy is an extremely sensitive issue in Pakistan, where 97 percent of the population is Muslim, and insulting Islam’s Prophet can be punished by death.

Prime Minister Nawaz Sharif also “strongly condemned” the publication of the cartoons. “Freedom of speech should not be used to hurt the religious sentiments of any community,” his office said in a statement to the media. “Publication of provocative material should be discouraged by the international community,” the statement added.

Pakistan’s blasphemy laws are some of the toughest in the world and, despite a de-facto moratorium on civilian executions, rights groups say they are used to persecute minorities and wage personal vendettas. Mobs often take matters into their own hands and lynch those accused of blasphemy, and such killers are widely feted.

After passing the resolution on Thursday, lawmakers and parliament employees marched on Constitution Avenue carrying placards reading: “Allahu Akbar” (God is Greatest) and “We are ready to serve the Prophet.”

Federal Minister for Religious Affairs Sardar Yousuf of the ruling PMLN party said all Pakistanis condemned the cartoon and saw it as “a conspiracy against Islam hatched through Western media.”

On Friday, less than a day after Parliament passed its resolution, the Tehreek-e-Taliban Pakistan’s splinter faction, Jamaat-ul-Ahrar, praised the Charlie Hebdo attackers. In a statement, spokesman Ehsanullah Ehsan claimed the new cover was an “invitation to death.”