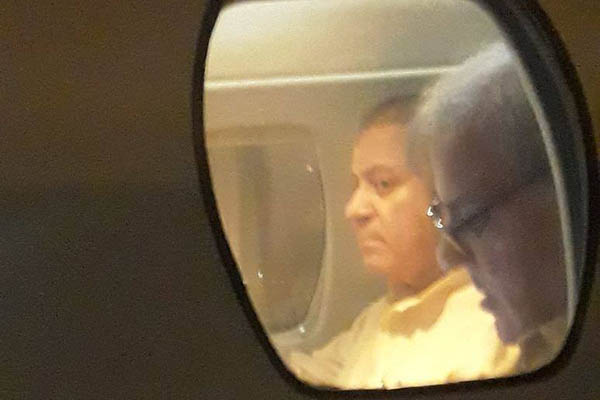 Jailed former prime minister Nawaz Sharif and his daughter have been temporarily released on parole for the funeral of his wife, government and party sources said on Wednesday.

Kulsoom Nawaz died of cancer in London on Tuesday, two months after her husband and daughter returned to Pakistan and were immediately jailed for corruption. Sharif had traveled home in a bid to rally support for his Pakistan Muslim League (Nawaz) party days before bitterly fought general elections.

Handout pictures released by PMLN on Wednesday showed Sharif and his daughter Maryam aboard a plane after their release late Tuesday and arriving in Lahore, where the former first lady’s funeral will be held.

The pair “have initially been released for 12 hours to attend the funeral but the release can be extended by the home department,” an official at Rawalpindi central jail told AFP.

Local media reported the funeral would be held on Friday, with their parole likely to last until after the service concluded.

Sharif’s wife Nawaz, 68, had been at her husband’s side throughout his decades-long political career, which saw him elected prime minister of Pakistan three times. She was diagnosed with lymphoma in August last year and had been receiving treatment at a private hospital in London for months.

Sharif was ousted from his third premiership by the Supreme Court a month before his wife’s diagnosis.

Conspiracy theories claiming that Nawaz was actually healthy, and that the Sharifs were faking her illness to gain sympathy, swirled in the final weeks of Pakistan’s acrimonious election campaign. Sharif had been banned from contesting the poll but maintained control over his party through his brother. His return was seen as a failed gamble to salvage his political legacy.

He has engaged in a war of words with Pakistan’s establishment since his dismissal last year, accusing the military of engineering his fall from power, curbing democracy and fostering links with militants.

New Prime Minister Imran Khan, a former cricket hero who had campaigned against the Sharifs for his entire 22-year political career, sent his condolences on Tuesday.