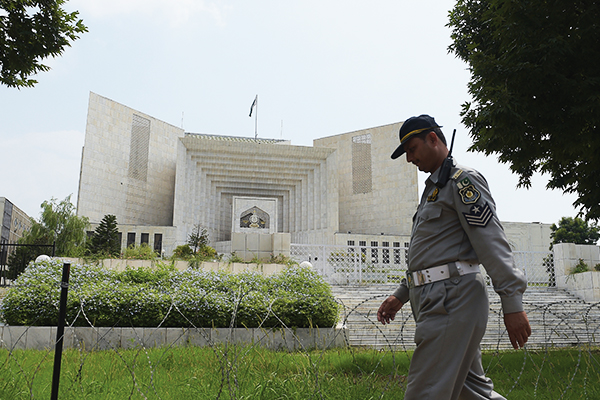 Now that the Supreme Court has settled the issue of whether or not military courts are legal, there remains a secondary issue: Are they necessary?

In the first place, the point behind the establishment of military courts was not to prosecute terrorists in a more effective manner. Instead, the point was to make a statement of intent; to declare that the state had finally recognized that it was facing an existential threat and that it would now be using every single weapon in its possession, including those previously thought unconstitutional, to deal with that threat.

Lest we forget, the second most popular party in Pakistan spent the 2013 election season demanding that the Pakistani Taliban be recognized as stakeholders with genuine grievances and arguing that the campaign of terror being waged in Pakistan was what we deserved for fighting “America’s war.” The election was followed by a joint decision of all political parties to “negotiate” with the Taliban. This then resulted in a completely farcical situation whereby various unelected people met with other unelected people demanding the Constitution be jettisoned, elections be ignored, and 200 million Pakistanis be enslaved to their whims.

Look around now. The Taliban is on the run. Terrorist incidents have been reduced by 70 percent. And nobody is demanding that we go negotiate with the Taliban anymore. Instead, for the first time ever, the Taliban has been recognized as a direct threat to the existence of the state. In other words, either the state of Pakistan defeats the Taliban or vice versa. There is no middle ground now. And that, at least in my book, constitutes progress.

Shortly after 9/11, Alan Dershowitz wrote an article about how torture should be made permissible, subject to judicial oversight. As a tool of warfare, the Harvard law professor argued, it was better that torture was made subject to some sort of state control because it would inevitably get used. Dershowitz is no stranger to controversy, but this was generally seen as a step too far. A decade and a half later, the revelations of Abu Ghraib and Guantánamo have lost their power to shock. We all know now that the U.S. tortured people. More importantly, we know that torture was not just a one-off mistake by overzealous subordinates. Instead, it was state policy, sold to it by well-educated psychologists and bought avidly by leaders desperate for success against an inchoate enemy.

When a state fights for its survival, it will use whatever weapons it has at its disposal—just as a man fighting for his life will have no hesitation in ignoring Marquis of Queensbury rules. There is a valid argument to be made for procedural halfway houses. Yes, it would be good if all accused persons were only investigated and treated as per the highest standards. But during a war, it is often not possible to implement those standards. And if the choice is between some standards and no standards, one will happily settle for some standards.

Obviously, as the proposal for torture warrants shows, it is possible to push that argument too far. No matter what the circumstances, torture should not be permissible. But torture and military courts do not occupy the same degree of undesirability. What military courts have done is given the confidence to the Pakistani establishment to bring out its ugly secrets and subject them to some minimal degree of scrutiny. People who were once “disappeared” have now “appeared” in military courts. While judicial review is very limited in theory, our judiciary has decades of practice in evading legislative, and even constitutional, constraints. The language of the late, lamented Article 58(2)(b) of the Constitution provided that the President could dissolve the assemblies “in his discretion” and that no court was allowed to question that discretion. And yet the Supreme Court rejected that argument back in 1993.

To put it in simple terms, judicial review is the thin end of the wedge. More importantly, that crack is already widening. When the first challenge to a military court verdict was filed in the Supreme Court, the challengers were told instead to go to the appropriate High Court. This decision, by itself, radically increases the amount of scrutiny being brought to bear on military court decisions. The Supreme Court, as befits its stature, is an institution of great solemnity in which a limited number of cases are heard in hushed silence. By comparison, the High Courts are a bustling fish market in which the men of law haggle furiously over issues of justice. The direction to approach a High Court first also neatly places the military courts in their proper place, i.e., subordinate to both the High Courts and the Supreme Court.

All very well, you may say, but how does the system work in practice? It is still too early to say but, at least in my view, the signs are encouraging. One of the first challenges to a military court verdict alleges that the convict was a juvenile. Reportedly, that challenge has led to a review of the ages of all under-trial prisoners in military court cases. That constitutes progress. Before I get charged with being too easy to please, let me state clearly that I dearly wish I lived in a country in which military courts were not a necessary evil. But I don’t. I live in Pakistan.