New Game in the Gulf? 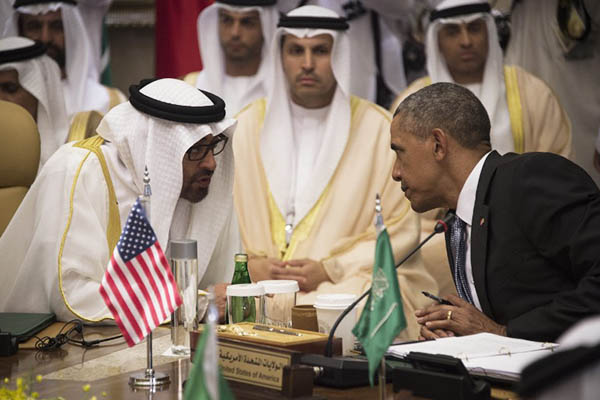 Pakistan must be ready for an American retreat from the Middle East.

President Barack Obama visited Saudi Arabia on Wednesday to patch up a fraying relationship. Saudi Arabia wanted U.N. sanctions on Iran to remain. They didn’t. In reaction, it has put together a 37-nation military alliance as the beginning of an anti-Iran move in Yemen and is putting the U.S. on notice for bilateral disengagement.

The U.S. Congress is thinking of suing Saudi Arabia over 9/11 since most of the killers were Saudis. The Saudis can retaliate by withdrawing their investments of about $750 billion in the U.S. Saudi Arabia has been hit by low oil prices but its dollar reserves are still around $800 billion, which means it still has regional clout. But the Gulf is protected by a U.S. fleet in Bahrain. Any divorce, if it comes, will take long and may be subject to a rethink on both sides.

Under the Obama administration, U.S. policy in the Middle East has been that of passivity, presaging another of America’s famous retreats from foreign policy after extravagant interference abroad. But Washington is not exactly letting Iran off the hook. It has decided to compensate itself with at least $2 billion from Iran’s U.S.-based dollar reserves for the two acts of terrorism it attributes to Iran: 241 American soldiers killed in 1983 in a Beirut terrorist attack and 19 Americans killed the Khobar Towers bombing in Saudi Arabia in 1996.

But despite its “pivot” against China in Asia, America looks to be walking away from the Middle East in the face of a Chinese advance. Vali Nasr has taken note of how China is replacing America. In The Dispensable Nation: American Foreign Policy in Retreat, he writes: “China’s trade with Iran has grown from $1.3 billion in 1999 to $45 billion in 2011; with Saudi Arabia from $4 billion in 2001 to $50 billion in 2011; and with Egypt from less than a billion in 2001 to $9 billion in 2011. Since 2006 China has been exporting more to the Middle East than the United States does, and the same is true for imports since 2009. In 2010, Chinese exports to the region were close to double that of the United States (China is now the largest exporter to the region), and Chinese direct foreign investment took off, leaving America far behind: 30 percent of China’s global contracts in that year were with Arab enterprises.”

China is Iran’s biggest trading partner, importing Iran’s oil and investing in its infrastructure; it is also the biggest investor in Central Asia, Afghanistan and Pakistan. India has invested big in Iran and Afghanistan and has reached out to Saudi Arabia and the Gulf States, while Pakistan needs to normalize its relations with Afghanistan and Iran for its economic security. Pakistan must not allow its rivalry with India to hurt it if new alignments take shape in the region after an American retreat.

Either the USA destroys a country by physically attacking it or else usurps its savings parked in the USA in good faith. Wants to do the same with Iran & Saudi Arabia.
Who knows, #PanamaPapers may also be an attempt to usurp I’ll gotten money to uplift US economy?

Pakistan which was created artificially in the name of Islam for the strategic needs of departing British is in debt to Islamic fundamentalism and extremism and has used Islamic extremists as a tool of its foreign policy in the region and fear of India as justification for breaking all international rules, and has embroiled Saudi Arabia and US in his game. It is time for the US, Saudi Arabia and international community to leave Pakistan in its own mad mes and move with democratic India.