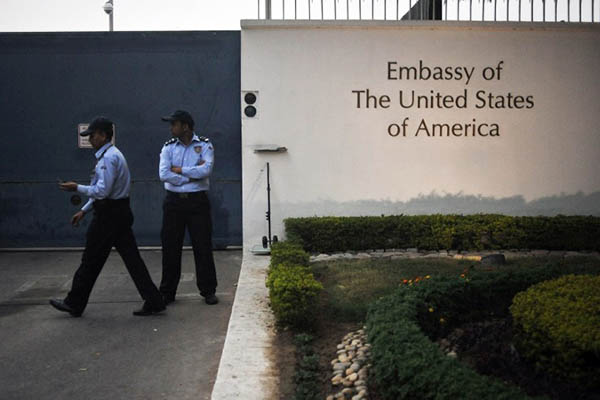 Analysts say changes at the U.S. Embassy in India offer both Washington and Delhi a chance to ‘reboot’ their ties.

The sudden resignation of the U.S. ambassador to India less than two years into her troubled term opens an opportunity for both sides to reboot strained ties ahead of an expected change in government, analysts say.

Nancy Powell, U.S. ambassador since 2012, had a torrid time at the helm of one of Washington’s most important diplomatic missions as it became embroiled in one of the most serious downturns in relations in decades.

New Delhi was incensed in late December when an Indian diplomat in New York was arrested, strip-searched and then pursued in court over allegations she violated visa rules by underpaying a domestic servant.

Powell, who has spent 37 years in the U.S. foreign service, had to manage the firestorm, contending with furious Indian officials and even facing personal difficulties over threats to withdraw her travel privileges. A host of retaliatory measures taken by India over the arrest included the withdrawal of additional security measures at the U.S. Embassy and threats to close an embassy-run social club.

“The Indian government took a hard stand after the arrest of [Deputy Consul-General Devyani] Khobragade,” said Neelam Deo, director of Gateway House, a foreign policy think tank in Mumbai. While managing this, Powell was also central to a sharp—some say belated—change in U.S. policy over opposition leader Narendra Modi who is tipped to emerge as prime minister after national elections starting next Monday.

The U.S. decided to end a decade-long boycott of Modi, who was chief minister of western Gujarat state in 2002 when anti-Muslim riots broke out, leaving more than 1,000 people dead. In February, long after European powers had re-engaged, Powell called upon the prime ministerial candidate of the Bharatiya Janata Party at his office in the state capital of Gujarat.

“The sense in Washington is that they should have engaged with Modi much earlier than February,” Deo explained. “He is being considered a serious prime ministerial candidate by the United States.”

The Hindustan Times reported Tuesday that Powell had been privately criticized by many officials for failing to be more proactive on lifting the boycott of Modi. The same paper reported last week that her imminent departure was “an attempt by the Obama administration to ‘clean the slate’ with India.”

The reasons for her exit have been explained by the U.S. State Department as her simply deciding to end her distinguished career early and retire to her home in Delaware state. “It is the internal matter of the United States and we do not have a comment to make,” said an Indian foreign ministry spokesman.

But whatever the reasons, most agree that her decision to leave offers both sides a chance to rebuild with new personalities amid speculation that U.S. President Barack Obama will now appoint a heavy-hitting figure to lead in New Delhi.

On his visit to India in 2010, Obama called the budding strategic relationship between the United States and India as “one of the defining partnerships of the 21st century.” But after finally overcoming their Cold War-era suspicions, the Khobragade episode has set back ties, leading to a flurry of cancellations between officials, which have resumed only tentatively in recent months.

“The change [at the U.S. Embassy] is coming at a time when there is a downturn in the relationship,” noted former Indian diplomat G. Parthasarathy.