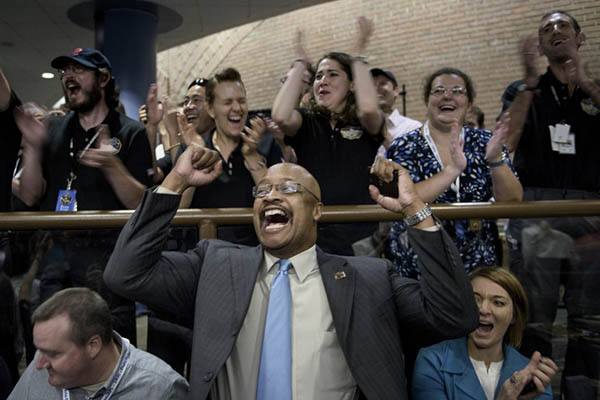 Spacecraft is now outbound from dwarf planet with scientists aiming for objects billions of miles beyond it.

NASA’s New Horizons survived its historic flyby of Pluto, the U.S. space agency said Tuesday after receiving a long-awaited signal from the spacecraft that it was still intact.

“We have a healthy spacecraft,” said mission operations manager Alice Bowman, confirming that contact had been made with the spacecraft after a journey of three billion miles. “We are outbound from Pluto.”

Applause broke out periodically in mission control as engineers reported that the spacecraft hardware was healthy and was communicating as planned during its “phone-home” signal. Moving faster than any spacecraft ever built, at a speed of about 30,800 miles per hour, the nuclear-powered New Horizons reached the climax of its decade-long mission some 13 hours earlier when it whizzed by Pluto.

The piano-sized spacecraft spent most of the day out of touch with Earth, busily snapping pictures of Pluto as it hurtled by on auto-pilot. But even a rice-sized piece of space debris could have destroyed the $700 million spacecraft and its seven science instruments.

NASA had estimated the chance of losing the spacecraft to a debris strike at one in 10,000.

New Horizons, a nuclear-powered spacecraft, launched from Cape Canaveral, Florida in 2006. The mission was hailed as a milestone in space exploration because it was the first spacecraft to visit Pluto, a mysterious celestial body of which little is actually known.

Already New Horizons has shipped back a trove of tantalizing images, showing the dwarf planet in unprecedented detail, as a reddish globe with varied terrain, some ice caps and an oddly perfect heart shape on its surface. The remaining images and data will be sent back to Earth over the course of the next 16 months.