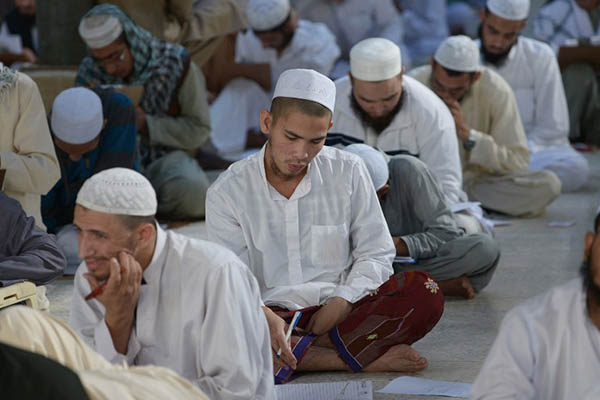 Students at a madrassah in Karachi. Rizwan Tabassum—AFP

Pakistan plans to bring all of its madrassahs under its national education system within one year under a landmark security policy aimed at combating extremism.

The first National Internal Security Policy, a copy of which was seen by AFP on Sunday, says that some of the country’s 22,000 madrassahs are responsible for spreading extremism.

Interior Minister Chaudhry Nisar Ali Khan presented the policy in Parliament on Wednesday after a decade-long Islamist insurgency that has claimed thousands of lives and cost the economy “more than $78 billion.”

On the topic of religious schools, the document says: “It is important to mention upfront that not all madrassahs are a problem and therefore these must not be viewed negatively as a whole. However, there were problems within some madrassahs which have spread extremism.” It also notes that “financing from unidentified sources” and the “publication and distribution of hate material” are major issues that need to be dealt with.

The vast majority of madrassahs in Pakistan fall outside government control and offer little in the way of mainstream subjects for their students. Some of them preach violence and propagate hatred toward other sects and non-Muslims.

“A large number of terrorists, either are, or have been students of madrassahs where they were brainwashed to take up arms against the state,” the paper said.

The 94-page policy document offers a candid and introspective look at where Pakistan has been failing in its efforts to fight terror. It criticizes the country’s military for being “unable to demonstrate other capabilities essential to successful counter-insurgency: hold, build and integrate,” adding it is up to civil institutions to take up the slack.

The policy calls on the government “to build a national narrative on extremism and terrorism”—opinion polls in the past have shown there is no overwhelming public consensus on tackling extremist groups.

The document also calls for the establishment of a Federal Rapid Response Force and Counter Terrorism Department within police forces in the next six months.