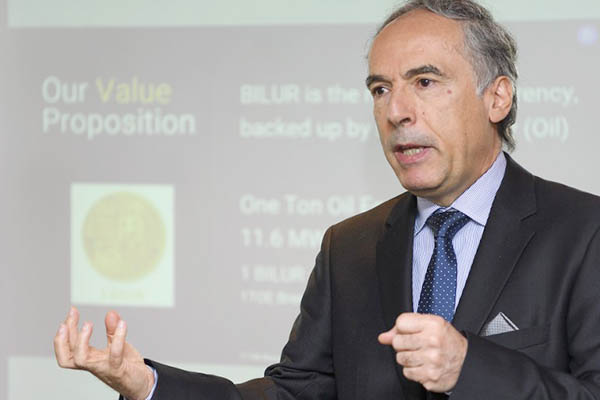 The currency called “bilur” and created by London-based financial services company R Fintech uses the technology pioneered by Bitcoin, while trying to offer an alternative for those weary of the wild fluctuations that have plagued digital currencies. “This is the first crypto-currency with a real value,” R Fintech Ignacio M. Ozcariz chief executive told reporters in Geneva.

To start, the company has valued 1 bilur as equivalent to 6.5 barrels of brent crude oil, making it an asset worth $356.

Texas-based oil company Hockley has initially set aside 1 million barrels of crude as collateral to underpin the currency but has told R Fintech it can ramp up if bilur becomes popular.

Like Bitcoin, bilur is run with so-called blockchain technology, where encrypted digital coins are created by supercomputers, regulated and controlled by a community of users who try to guard against counterfeiting. Bitcoin was the world’s top performing currency in 2016 and continues to hover around record highs of $1,400, after being worth just a few cents when it launched in 2009. It has appealed to those interested in bank-free transactions and to money not controlled by a government or central bank.

But detractors have suggested that Bitcoin could ultimately be undermined by its volatility, noting that the currency dramatically lost 75 percent of its value in 2013.

Bilur is targeting those who like aspects of virtual currency trading but would prefer funds supported by a fixed asset—similar to a gold standard for traditional currencies. “We’re still a crypto-currency, we’re just backing it up with a real physical thing,” said Usama al Ali, an I.T. specialist at R Fintech.

With the project in its infancy, there are no merchants accepting bilur as a valid form of payment. Bitcoin is in contrast increasingly accepted by merchants worldwide.

R Fintech said it aims to make money through a small management fee, charging bilur holders roughly three percent per year. The name “bilur” is the Basque language word for “chain,” a nod to blockchain technology, the company said.