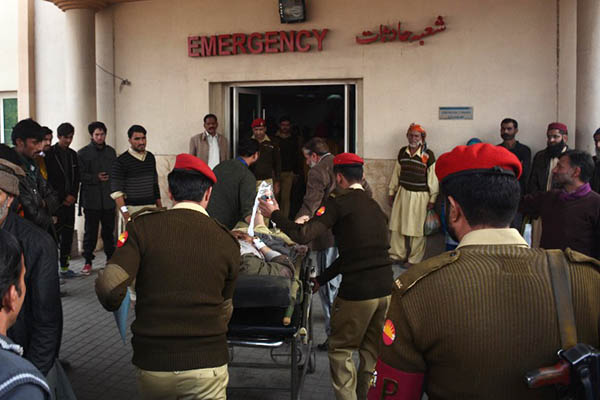 Pakistani officials say seven others were wounded after Indian soldiers opened fire on a passenger bus in disputed Kashmir.

At least nine people were killed and seven others wounded in cross-border fire that hit a Pakistani bus in disputed Kashmir on Wednesday, officials said, the latest deadly skirmish between India and Pakistan.

The incident came a day after India said three of its soldiers had been killed by Pakistani troops and threatened “retribution,” a claim angrily rejected by Pakistan.

“Indian troops targeted a civil Bus near LoC [the Line of Control] in Neelam (sic) valley,” the military said in an emailed statement. In a separate statement it said that “intense firing” was ongoing.

Prime Minister Nawaz Sharif condemned the firing. “Prime Minister Muhammad Nawaz Sharif has condemned in the strongest words the unprovoked firing by Indian security forces on a civil bus carrying innocent civilians along LoC near Neelum valley today,” said a statement by his office. The statement added: “India has failed to comprehend the gravity of the situation [at LoC] and was trying to divert the attention of the international community from the grave human rights violations and atrocities being committed by the Indian security forces in the Indian Occupied Jammu & Kashmir.”

Pakistan’s foreign ministry said it also summoned the Indian Deputy High Commissioner, J.P. Singh, to its foreign ministry to protest the “targeting a civilian bus and an ambulance which was rescuing the affectees of the attack on the bus” and declared it a blatant violation of international humanitarian law.

On Tuesday the Indian army accused Pakistan of sending soldiers across the LoC, the de facto border that divides Kashmir, and killing three of its soldiers, saying one of the bodies had been mutilated. But Pakistan angrily rejected the claim in a series of tweets from a foreign ministry spokesman late on Tuesday, calling it “baseless” and a “fabrication.”

Tensions in the long-disputed Himalayan region reached dangerous levels in September, after India blamed Pakistani militants for a raid on an army base that killed 19 soldiers. India said it had responded by carrying out “surgical strikes” across the heavily militarized border, sparking a furious reaction from Islamabad, which denied the strikes took place.

There have since been repeated outbreaks of cross-border firing, with both sides reporting deaths and injuries including of civilians.