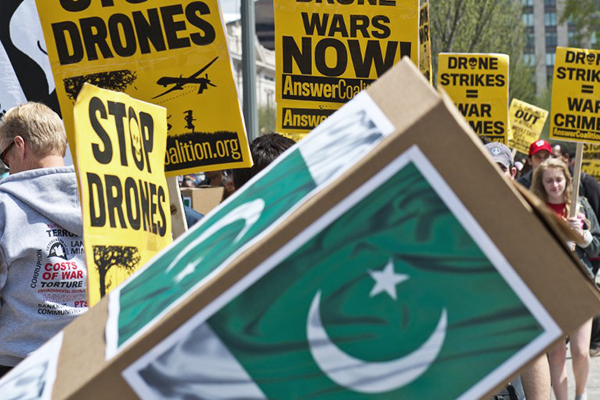 An anti-drones protest outside the White House, April 13. Nicholas Kamm—AFP

“Two missiles were fired,” said a local security official of the latest strikes, asking not to be named. “The target was a base believed to be run by the Tehrik-e-Taliban Pakistan, so far five militants have been killed and two are injured,” he said. The strikes occurred in South Waziristan’s Baber Ghar.

Three days earlier, drones targeted Datta Khel, a town some 35 kilometers west of North Waziristan’s chief city of Miranshah. “[Six] drones kept hovering at the compound for a while, and then one drone fired two missiles at the time of sunset,” said a security official. “At least four militants were killed in the strike.”

An eyewitness said the compound caught fire after the strike. “The bodies of the militants were severely burnt and it was hard to identify them,” said Haji Gul Badin, a local shopkeeper.

Both Waziristan agencies are the stronghold of militants affiliated with Al Qaeda and the Taliban. The Pakistani Army is currently engaged in an operation in nearby Khyber tribal agency in a bid to protect the capital of Khyber-Pakhtunkhwa province, Peshawar, from more violence ahead of the national and provincial elections scheduled for May 11.

Pakistan has repeatedly denounced U.S. drone strikes as a violation of national sovereignty and as counterproductive because they inflame anti-American sentiment that begets more violence. Previously, the elected government of then Prime Minister Yousaf Raza Gilani and the Army chief, Gen. Ashfaq Kayani, had privately supported drone strikes, according to U.S. State Department cables disclosed by the secrets-spilling website WikiLeaks.

In a recent interview with CNN, Pervez Musharraf, who was Pakistan’s president and Army chief when the first drone strike took place, in 2004, acknowledged that his government had allowed the U.S. to conduct drone strikes but “only on a few occasions, when a target was absolutely isolated and [there was] no chance of collateral damage.”

According to Britain’s Bureau of Investigative Journalism, an independent not-for-profit organization founded three years ago, there have been 367 drone strikes in Pakistan since 2004, with 315 of them taking place after Barack Obama was elected U.S. president. The strikes have reportedly killed between 2,541 and 3,587 people, and injured between 1,174 and 1,465. The dead include between 168 and 197 children.

Please change the name of Waziristan to “Texas”
so that drone can be stopped.