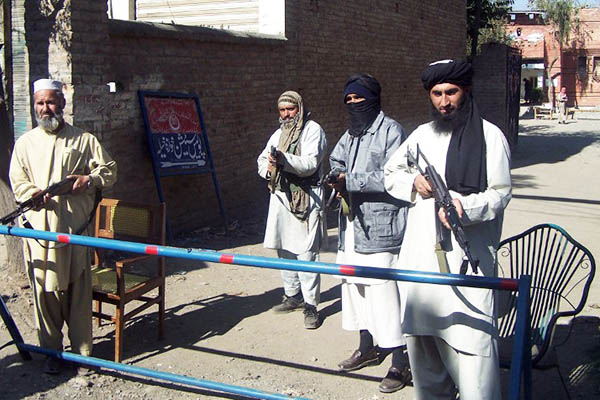 Feud between rival factions of the TTP continues in fourth day of fighting.

Nine people were killed Wednesday in a fourth day of fighting between two feuding factions of the Pakistani Taliban in the restive northwest, intelligence and militant sources said.

A total of 43 people have now died in clashes that erupted on Sunday between supporters of Khan Said Sajna and followers of the late Hakimullah Mehsud group. Both factions are part of the Tehreek-e-Taliban Pakistan (TTP) umbrella group, which has been waging a bloody seven-year insurgency against the state.

Four militants were killed when a vehicle of the Sajna group came under attack in the Shawal area of the South Waziristan tribal region, which borders Afghanistan. In another incident, the Sajna group attacked a hotel in Tank, killing three militants from the Mehsud group as well as two civilians.

Militant sources suggested that differences emerged after Sajna, a senior commander, was rejected for the TTP leadership, after then-leader Mehsud was killed in a U.S. drone strike last November.

The TTP has long been riven by infighting.

Sajna had been seen as a strong candidate to become TTP chief following Mehsud’s death. But the TTP’s ruling council at the last minute elected Mullah Fazlullah, who hails from Swat and is believed to be hiding in Afghanistan.

The Pakistani government began negotiations through intermediaries with the TTP in February to try to end its insurgency. The militant group has demanded the release of what they call “noncombatant” prisoners and the establishment of a “peace zone” from which security forces would be barred.

Tehreek-e-Taliban Pakistan (TTP) umbrella group, which has been waging a bloody seven-year insurgency against the state,

WHAT STATE THEY ARE KILLING THE POOR ,THEY DARE GO NEAR RICH AND INFLUENTIAL THEAV*S.