Home Lightbox No End in Sight 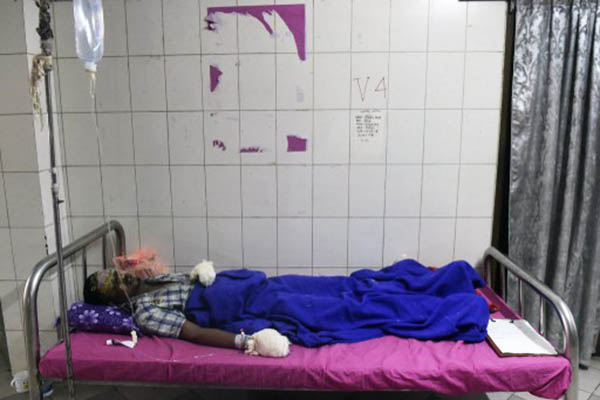 A Bangladeshi who is being treated for wounds suffered from a petrol bombing. Munir uz Zaman—AFP

Bangladesh turmoil continues as rival political parties continue waging war on each other.

Twelve-year-old Rakib Mia was on his way to scavenge for his family when a petrol bomb exploded on the floor of his bus in Bangladesh, turning him into a human fireball. “What did he do to anyone?” said his mother Rashida Khatun after watching her son wheeled off for surgery at Dhaka’s main hospital, overflowing with victims of a lethal standoff between government and opposition. “He is the one that feeds our family. We can only earn our living with our hands but he can’t even do that now.”

The enmity between Prime Minister Sheikh Hasina and opposition leader Khaleda Zia stretches back decades and violence between their camps is nothing new. But observers fear the latest bloodshed, which has killed more than 80 people this year, could become part of everyday life in this country of 160 million.

While neither side rules out talks to resolve a crisis that stems back to Hasina’s 2014 re-election, diplomats and analysts see few grounds for optimism as the premier entrenches her position and Zia is confined to her headquarters. “This conflict will continue and burn slowly … Stability will remain elusive until the 2019 elections,” said Dhaka-based analyst Ataur Rahman. “Zia must take part of the blame for the violence but remains hugely popular,” added Rahman, who predicted she could spend years under house arrest like Myanmar’s Aung San Suu Kyi.

Bangladesh Nationalist Party (BNP) leader Zia says she has been unable to leave her office since Jan. 3 when she called protests to mark the first anniversary of Hasina’s “farcical” re-election.

Hasina and her Awami League enjoyed an effective walkover last January after the BNP and 19 other parties boycotted a general election over rigging fears. Since Zia called a transport blockade to try to force new elections, hundreds of vehicles have been firebombed in attacks the government claims have been carried out by opposition militants. The BNP blames the ruling party and security services.

Scores of opposition activists have also been shot dead. While more died in the run-up to last year’s election, the latest violence is in many ways more frightening as it is so random and there is no obvious endpoint with elections not due until 2019.

Sazzad Khondoker, a surgeon at Dhaka Medical College’s burns unit, said 55 patients were being treated for firebomb injuries, putting huge strain on the 100-bed facility where patients on gurneys now clog the corridors. “The [Molotov] cocktails and petrol bombs have accelerant agents so the fire spreads rapidly and [injuries are] more penetrating,” he said. One ward has been set aside for firebomb victims, many with similar tales of how their vehicles were targeted by youths who are believed to have been paid less than $5 to carry out attacks.

Rakib suffered serious burns all over his body while traveling to gather scraps at a vegetable market in Gazipur, north of Dhaka. Hasina herself broke down in tears while meeting victims last week.

Asked afterwards if she would consider talks with the BNP, she snapped: “With killers who are burning people? There can be no such question.”

Information Minister Hasanul Haq Inu said the government is not against the principle of talks but not in the current climate. “Our major priority is to stop the religious militancy attacks,” he said, referring both to the BNP and its allies Jamaat-e-Islami, a banned Islamist party widely suspected of being behind some fire-bombings.

Talking to AFP last week, Zia reiterated demands for Hasina to step aside while a “neutral” government organizes polls but said there was room for debate. “We’ve not said others have to agree what we’ve proposed. It should be based on the consensus of all parties and through talks,” she said by phone.

Inu countered that Zia had been invited to join a unity government ahead of the 2014 elections but snubbed the offer. Zia’s boycott is widely seen as a blunder, as polls pointed to a BNP victory.

One senior European diplomat said there would have been extensive poll monitoring and Zia would have had widespread diplomatic backing had she lost through rigging. The BNP’s efforts to bring the country to a halt were now having only a limited impact, added the diplomat, with life in Dhaka carrying on as normal.

Another Western diplomatic source said the current violence was in danger of becoming “the new normal” as Zia had been “cornered” by her nemesis Hasina. Their mutual loathing dates back three decades, earning them the title ‘Battling Begums.’

Hasina’s father was Bangladesh’s first leader after the 1971 independence war while Zia’s husband was a battlefield hero in the conflict against Pakistan before becoming head of a military government. Both men were assassinated, ensuring their martyr status.

Even the next generation has become mired in the poison, with Zia’s son and heir apparent Tarique Rahman a government bête noire. Rahman is exiled in London but is being tried in absentia over a deadly 2004 bombing that wounded Hasina.

Some within the BNP fear the government is trying to destroy the party, slapping Zia and other leaders with violence-related charges which would bar them from elections.

Bangladesh has seen around 20 coups since 1971 but the military has denied reports that it could intervene again.

Dhaka University professor Imtiaz Ahmed said there was no quick fix. “This conflict will continue until and unless we have an inclusive election,” he said.