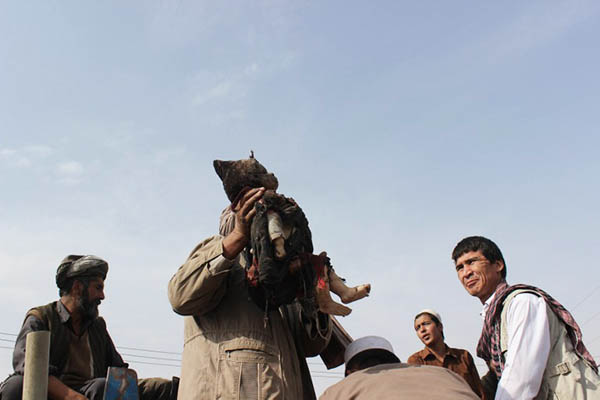 An Afghan man carries the body of a child following a NATO coalition airstrike on the outskirts of Kunduz. Bashir Khan Safi—AFP

Refuting local allegations, U.S. claims there is no proof of civilian casualties in an airstrike last week

U.S. Forces said on Tuesday they had found no evidence of civilian casualties caused by an airstrike in Afghanistan during a joint operation last week, contradicting claims by officials and residents.

Kunduz provincial governor Asadullah Omarkhail told AFP on Tuesday that one civilian had been killed and six wounded in an airstrike in the northeastern province, reaffirming his earlier toll. But U.S. Forces said an independent investigation into the incident had found “no evidence of civilian casualties.”

“The USFOR-A investigation was conducted independently and concluded that there were no civilian casualties,” it said in a statement. “Specifically, no hospitals or clinics in the local area indicated treatment of people with wounds from armed conflict.”

U.S. Forces confirmed it had conducted operations in the area and that “numerous enemy combatants were killed.” That contrasts with various accounts in Kunduz that several civilians had been killed or wounded in the attack.

A villager in Char Dara district, which was targeted by the airstrike, put the civilian death toll at 11. A hospital in the provincial capital of Kunduz said six wounded had been brought to the facility for treatment.

Civilian casualties from airstrikes—a politically sensitive issue in Afghanistan—have surged this year as the United States intensifies aerial bombardments and Afghanistan’s fledgling air force carries out its own bombings.

U.S. aircraft dropped 751 bombs and missiles on Taliban and Islamic State militants in September, up 50 percent from August and the highest since October 2010, according to U.S. Air Forces Central Command data.

A recent U.N. report showed 466 civilian deaths or injuries from airstrikes between January and September, up 52 percent from the same period last year, with women and children accounting for more than two thirds of the victims. The U.S. is the only foreign force in Afghanistan carrying out airstrikes.