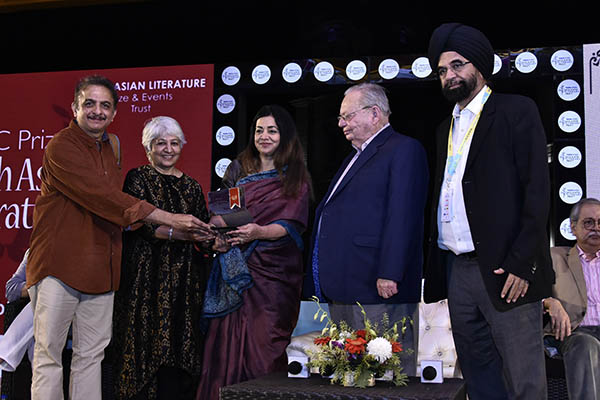 The DSC Prize for South Asian Literature 2018 was awarded on Friday to No Presents Please during a ceremony at India’s Tata Steel Kolkata Literary Meet presided over by chief guest Ruskin Bond.

Authored by Jayant Kaikini in the Kannada language, and translated by Tejaswini Niranjana into English, No Presents Please marks the first time that a translated work has won the DSC Prize. The trophy and prize money of $25,000 will be shared equally between the author and translator.

Speaking on behalf of the five-member jury, this year’s Chair Rudrangshu Mukherjee said No Presents Please was chosen for the award because of the manner in which the author “presented vignettes of life in Mumbai and made the city the protagonist of a coherent narrative.” He added: “The Mumbai that came across through the pen of Kaikini was the city of ordinary people who inhabit the bustling metropolis. It is a view from the margins and all the more poignant because of it.”

No Presents Please was among a list of six shortlisted works in contention for this year’s DSC Prize. In addition to the winner, the shortlisted works included Kamila Shamsie’s Home Fire; Miss Laila Armed and Dangerous by Manu Joseph; Exit West by Mohsin Hamid; Neel Mukherjee’s A State of Freedom; and Harilal & Sons by Sujit Saraf.

Co-founder of the Prize, Surina Narula, congratulated Jayant Kaikini and Tejaswini Niranjana on the occasion and praised the shortlist chosen by this year’s jury. “The challenges faced by the authors to weave their protests against the wave of anti globalization into their writings of seemingly harmless pieces of literature could be seen through their work, migration being a major theme this year,” she added.

The DSC Prize for South Asian Literature 2018 was judged by a diverse panel comprising eminent figures drawn from across the world who have worked in or around South Asian literature and issues. In addition to jury chair Mukherjee, it included: writer, actor and child-rights activist Nandana Sen; Associate Editor, Culture, for The Guardian Claire Armitstead; Executive Director of the bi-national United States-Sri Lanka Fullbright Commission Tissa Jayatilaka; and Professor of English at BRAC University and a member of Naripokkho, Firdous Azim.