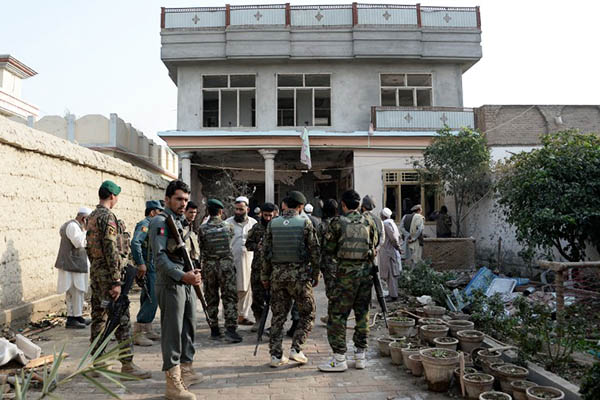 As Afghan military forces near the end of a second year leading security operations across their battered country, new numbers highlight a sobering reality: They are being killed in horrific numbers.

The U.S. military, which leads a NATO mission to train and assist the Afghans, often gives upbeat assessments about Afghan military performance. But a rising death rate raises questions about how much more local forces can endure, and underscores the Taliban’s continued strength.

Afghan police and army units in 2015 succeeded NATO in providing security for Afghanistan. That year an estimated 5,000 were killed and another 15,000 wounded. The death toll this year is much worse already, with 5,523 Afghan police and troops killed just in the period from Jan. 1 to Aug. 19, according to the Special Inspector General for Afghanistan Reconstruction (SIGAR).

An additional 9,665 personnel were wounded in the same period—and the “fighting season” is far from over.

For perspective: Since the U.S.-led invasion in October 2001, a total of 1,832 American troops have been killed in combat in Afghanistan. Still, Votel and other brass point to Afghan successes, particularly among special operations forces.

The Afghans have “denied the Taliban and their associated elements from achieving their objectives. It certainly has come at a cost and the Afghan forces, particularly the army, have demonstrated, I think, great resilience as they’ve worked through those casualties,” Votel said.

The death toll is helping fuel a shortfall in the Afghan army’s ranks, said General John Nicholson, the top U.S. and NATO commander in Afghanistan. The service has spots for about 190,000 troops but current levels are stuck at around 170,000.

“They are still short of their overall recruitment objectives,” Nicholson said. “Because of the high losses, we are not making up the deficit we have in the overall strength of the Afghan security forces.”

He blamed poor leadership and deep-rooted corruption as major factors. “These young police officers who are out dying on the checkpoints don’t always have enough food, or water, or ammunition and their leader may not be with them,” Nicholson said.

Still, SIGAR found, morale within the ranks appears good, with three quarters of recruits saying they have received good care and 90 percent satisfied with their pay.

Fifteen years and hundreds of billions of dollars after America led an invasion of Afghanistan to ouster the Taliban in the wake of the September 11, 2001 terror attacks, the security situation often feels like it is held together by thread. And despite being America’s longest-fought war, the conflict is largely forgotten at home.

During three lengthy debates between presidential candidates Hillary Clinton and Donald Trump, Afghanistan got scarcely a passing mention—even though the situation there will be an urgent matter for the new president.

The Taliban threat forced President Barack Obama to slow plans to draw down U.S. troop numbers at the end of this year. Taliban activity surged in 2015, including with the brief seizure of the capital of Kunduz province in the north.

U.S. Brigadier General Charles Cleveland, a senior spokesman for NATO’s Operation Resolute Support, said incoming U.S. units would be “reconfigured” to focus more on training and advising the Afghans, and noted the U.S. military would shift some logistical functions overseas.

The Taliban’s 2016 strategic goal is to seize another capital like they did in Kunduz, and they have launched at least seven assaults including in Kunduz, Lashkar Gar in poppy-growing Helmand province and Tarinkot, the capital of Uruzgan province. “None of those provincial capitals has fallen,” Cleveland noted.

“While the Afghan defense of these places has not been perfect, and it hasn’t been pretty all the time, at the end of the day they have been successful and they have been able to defend these capitals.”

Ten percent is in Taliban hands, and the rest is still being fought over.

Additionally, the Taliban-allied Haqqani network continues to conduct high-profile attacks in Kabul and elsewhere, and the military is bracing for further assaults.

General Joe Dunford, Chairman of the Joint Chiefs of Staff, in September called Afghanistan “roughly a stalemate,” but Nicholson later nuanced this by describing it as more of an “equilibrium.”

“But we believe it’s an equilibrium in favor of the government, because they are controlling the majority of the population,” Nicholson said.