Home Latest News No Rest for Families of Missing Persons

No Rest for Families of Missing Persons 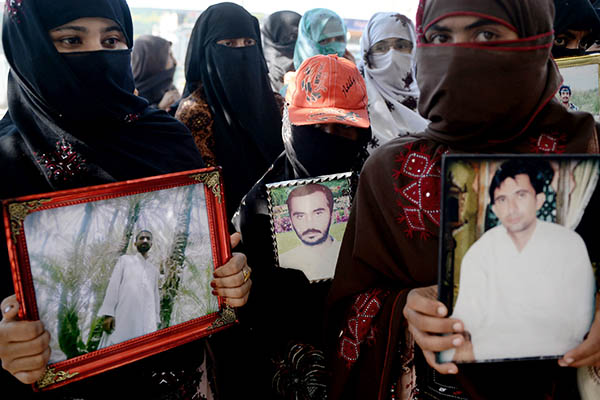 Men, women and children who had marched from Quetta to Karachi have now set off for Islamabad to demand justice.

Relatives of people who have gone missing from Balochistan province set off on a grueling 1,200-kilometer march from Karachi to Islamabad on Saturday, hoping to recover their loved ones.

The more than two-dozen men, women and children had camped in the commercial hub for nearly three weeks after walking 700 kilometers from Quetta, the capital of Balochistan, where a violent insurgency against the Pakistani state has raged since 2004.

The latest leg of their journey will take them from Karachi, which lies on the Arabian Sea, to the capital city in the foothills of the Himalayas.

They hope to gain public support so they can pressure the government into freeing relatives who have disappeared, allegedly at the hands of Pakistan’s security services. “Our main objective is to secure release of our loved ones but unfortunately we have not received any help from the government so far,” said Muhammad Qadeer Baloch, leader of the march.

Baloch, 70, who also heads a non-governmental organization, Voice of Missing Baloch Persons, said: “Our next destination is Islamabad where we will finalize our future course of action.”

Tired of waiting for justice—or even news of the fate of their brothers, sons, and husbands—the men and women undertook the unprecedented march from Quetta to Karachi.

Balochistan is Pakistan’s largest but least populous province. It is also the least developed, which has exacerbated a long-running ethnic Baloch separatist movement that wants more autonomy and a greater share of its mineral wealth.

The latest armed insurgency rose up in 2004 and separatist groups still regularly carry out attacks on Pakistani forces.

Rights groups accuse the military and intelligence agencies of kidnapping and killing suspected Baloch rebels before leaving their bodies by the roadside.

According to Human Rights Watch, more than 300 people have suffered this fate—known as “kill and dump”—in the province since January 2011. The security services deny the allegations and say they are battling a fierce rebellion in the province.