No Word on Pakistanis Stranded in Saudi Arabia 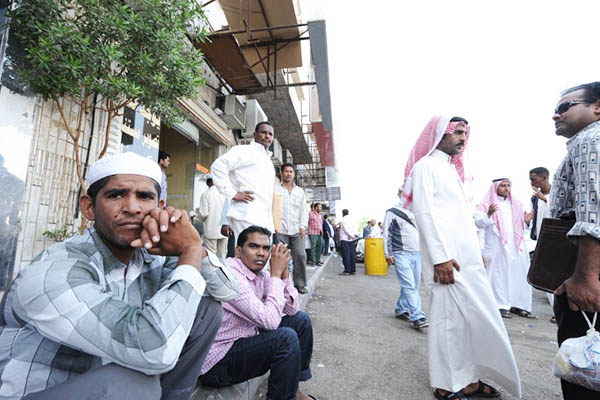 Saudi Arabia on Wednesday announced it would help around 2,500 Indian workers stranded without money in the kingdom, but did not mention thousands of Filipino and Pakistani workers in the same dire situation.

India’s minister of state for external affairs, V.K. Singh, said he had a “very good meeting” with Saudi Labor Minister Mufarrej al-Haqbani during which they discussed the plight of the workers. Singh arrived in the Red Sea city of Jeddah on Wednesday to negotiate the repatriation of the migrant workers who lost their jobs and were left without enough money to return home.

He said on Twitter that the Saudi government had taken “immediate action to ensure that all camps where Indian workers were staying are provided facilities like medical, food, hygiene and sanitation.” The government was also “providing free passage to all those who want to go back to India,” he added.

Speaking to reporters in Jeddah, Singh added: “All the people who want to go back can go back at the expense of the government of Saudi Arabia.”

Riyadh would also honor workers’ claims against companies that had defaulted on payments and had agreed to allow workers to transfer to other companies in the kingdom, he said. Under the kafala system, applied on foreign workers in Gulf countries, most employees are restricted from moving to a new job without their boss’s consent before their contracts end, leaving many trapped.

Rights groups have criticized it as a form of bonded labor or even slavery.

Asian activists and officials have said that thousands of jobless Indians, Filipinos, and Pakistanis are stranded and destitute in Saudi Arabia following the layoffs. Some of them have been forced to beg or sift through garbage to survive after going unpaid for months, according to officials.

The Okaz daily on Wednesday quoted labor ministry official Abdullah al-Alyan as saying that the kingdom had promised “urgent” action to help around 2,500 Indian workers. But Alyan dismissed as “rumors” that about 10,000 Indian workers had been left to starve.

He said the “immediate and urgent action” was to resolve the issues of “2,500 Indian workers from Saudi Oger who have faced difficulties due the delays in their salaries” and cut-offs in electricity and food supplies from their camps.

Singh told reporters that “things are not as bad as they have been shown” and insisted that only one company was involved.

Sources in March told AFP that delayed receipts from the government, whose oil revenues have dropped significantly in the past two years, left construction workers struggling while they wait for salaries.

“We will protect the rights of the workers, not from India alone, but from all countries [whose citizens are working] in this company,” Haqbani said without giving details.

Saudi Oger has built some of the most grandiose complexes in Riyadh, including the palatial Ritz-Carlton hotel. In May, Saudi Binladin Group—one of the world’s largest construction companies—began paying delayed wages to its remaining staff. The company had also dismissed tens of thousands of employees because of financial difficulties.