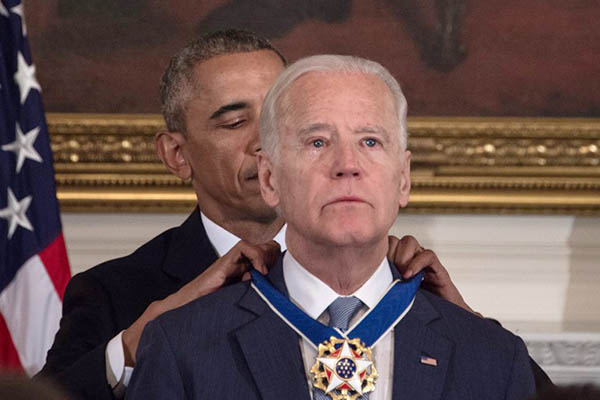 Biden was reduced to tears as the president in his last days in office surprised him by announcing he would be awarding the 74-year-old the Presidential Medal of Freedom. In remarks billed as a joint farewell to family, friends and staff before they leave the White House next week, Obama described Biden as “the finest vice-president we have ever seen” and a “lion of American history.”

“So, Joe, for your faith in your fellow Americans, for your love of country, and for your lifetime of service that will endure through the generations, I’d like to ask the military aid to join us on stage. For the final time as president, I am pleased to award our nation’s highest civilian honor, the presidential medal of freedom.”

Biden’s jaw dropped, he rolled his head back and turned his face away from the audience to wipe away the tears. After composing himself and receiving the medal, Biden stepped up to the dais and looked around the room in search of his chief of staff—and fired him, in jest, for not giving him early warning.