One Killed in Cricket Victory Celebrations 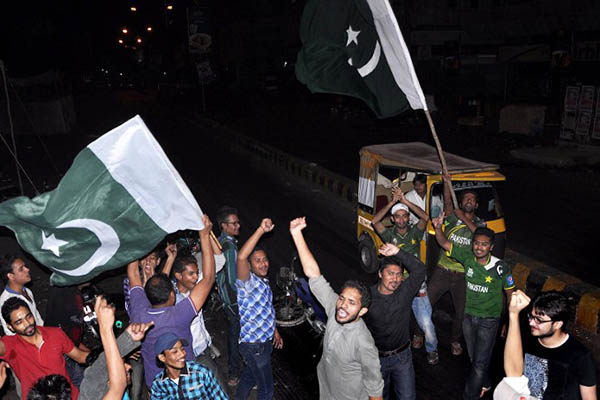 Rangers dispersed celebrating youth in Karachi, as a young boy was killed by a stray bullet in Hyderabad.

Pakistanis engaged in frenzied celebrations after a thrilling Asia Cup win against archrivals India late Sunday, with one boy killed by jubilant firing in the air.

Dashing all-rounder Shahid Afridi hit two sixes off the final over to seal a one-wicket win in Dhaka in a crucial match. The victory was watched by millions and young people jammed the streets of Karachi till late into the night to celebrate the event.

But celebrations were marred by tragedy in Hyderabad where the boy was killed, said senior police official Mir Farid Jan Sarhandi. Paramilitary Rangers were eventually called in to disperse jubilant youngsters in parts of Karachi.

Youths carrying green Pakistan flags and pictures of Afridi hailed the win as “a huge moment.”

“Afridi has made us proud,” said Khalid Shah. “Any win over India is just like winning the World Cup, so we are out to savor this.”

Real estate developer Malik Riaz announced he would give Afridi a residential plot in a newly built housing scheme in Karachi, saying the all-rounder has made the nation proud. Pakistan Cricket Board chairman Najam Sethi said the win would lift Pakistan at international level.

“Pakistan’s win has proved that we cannot be left isolated,” Sethi said in a television interview, referring to changes within cricket’s governing body last month that gave more power to the so-called Big Three of England, Australia, and India. The proposal was approved at an International Cricket Council meeting in Singapore.

“Pakistan will go on and win the Asia Cup and then the World Twenty20 to prove that we are a top cricketing nation,” said Sethi.

The next edition of the World Twenty20 will also be held in Bangladesh, from March 16-April 6. Pakistan previously won the event in 2009.

Cricketing contests between Pakistan and India are fairly rare. Since the World Cup semifinal in 2011, they have played just six one-day internationals and three Twenty20 matches against each other.