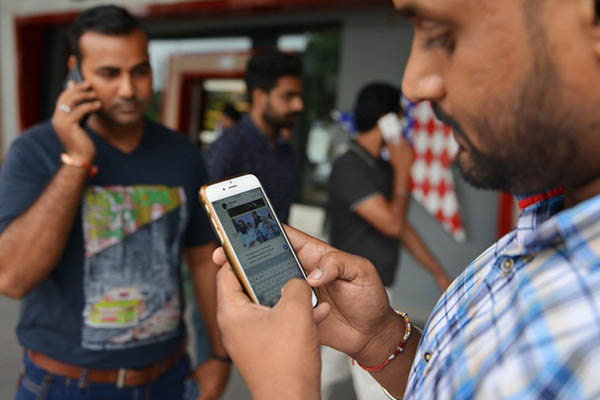 Independent fact checkers worry over rise in fake news, which has ignited violence in the past

As grief and outrage over the rape and murder of an eight-year-old hit peak levels in India last week, a wrenching video of the supposed victim singing “her last song” lit up phones across the country. But it was a hoax. The clip was nearly a year old and the girl someone entirely different, a lie that was discovered by a team of fact checkers who debunk the “fake news” shared by millions of Indians every day.

It is a herculean task exposing fake news before it spreads like wildfire in India, where an estimated quarter of a billion people use Facebook, WhatsApp and other social media platforms.

Small teams of myth busters must compete with huge volumes of content being shared in a multitude of languages, in many cases by first-time internet users unskilled in discerning fact from fiction. Independent fact checkers know the stakes are especially high in India, where fake news has quickly ignited violence.

Erroneous rumors of a salt shortage sparked panic across four states in November, triggering stampedes outside marketplaces that left one woman dead and countless injured. Angry mobs in eastern India beat seven men to death in May after they were accused of child trafficking in unverified messages circulated on social media.

Govindraj Ethiraj, founder and editor of Boom, a fact-checking website, said his team encountered at least a dozen instances of fake news a day “that can cause serious harm.”

“India is perhaps the only country where there are such violent outcomes of fake news,” he told AFP. “The way it manifests itself in India, I don’t think it happens in any other country. We are worst affected by this menace.”

Boom, which revealed the viral clip of the alleged child rape victim to be a fake, has just six people on its staff and is one of a handful of independent fact-checking teams in India.

Facebook this week announced a partnership with Boom to monitor state polls in Karnataka, its first such initiative in India, as the social media giant faces global scrutiny over its platform being misused to meddle in elections.

India is one of the world’s largest and fastest-growing internet markets, with just over a third of its 1.25 billion people connected to the web. Cheap data packages and inexpensive smartphones are bringing millions of new users online who are often unable to detect real news from fake, said Pratik Sinha, founder of “anti-propaganda site” AltNews.

“Suddenly people, especially from rural areas, are inundated with information and are unable to distinguish what is real from what is not,” he told AFP. “They tend to believe whatever is sent to them.”

Many of the hoaxes debunked by AltNews have incendiary potential: false allegations of low-caste Indians going on a destructive rampage, or Hindu women being taunted by Muslims in a hotbed state.

Ethiraj said this content often swirled “in corners of the country that we don’t even know about,” going viral in one of India’s myriad regional languages.

Once it takes off, it can be hard to stop: “Velocity creates veracity. People start believing it,” he said. It was a problem that “lawmakers and the police are finding difficult to deal with,” Ethiraj added.

Cow slaughter is a hot-button issue in India as the majority Hindus consider the animal sacred. A photo of Modi sweeping a floor went viral ahead of the 2014 election he won with a thumping mandate. It was later revealed the image was doctored.

A year later, an image of Modi surveying flood damage was pulled from a government website after being exposed as photoshopped.

Pankaj Jain, founder of SMHoaxslayer.com, said the rise of fake news presented challenges ahead of India’s 2019 general elections and it was important to present the truth to the people. “They need to be shown the truth in the way in which they consume [news] most like regional language channels and newspapers,” he said.