Ousted P.M. Sharif Sentenced to 7 Years in Jail for Graft 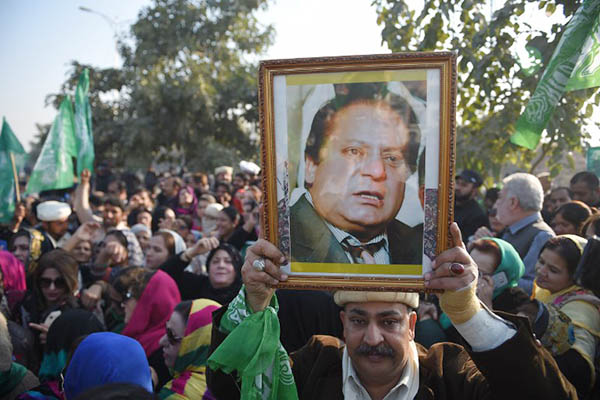 Accountability court acquits three-time premier in one case, but finds him guilty of corruption in another

Former prime minister Nawaz Sharif was sentenced to seven years in prison for corruption on Monday, state media reported, the latest conviction in a series of allegations which saw him ousted from power last year.

Sharif, a three-time prime minister of Pakistan, has denied all the charges against him and alleged the country’s security establishment is targeting him.

Monday’s conviction, centered on family businesses in the Middle East commonly known as the Al-Azizia Steel Mills corruption reference, is his second stemming from a corruption investigation spurred by the Panama Papers leak, and comes as new Prime Minister Imran Khan has vowed to tackle endemic graft in Pakistan.

He was also fined, according to local media, $25 million and Rs. 1.5 billion. He has been acquitted in the Flagship reference case related to family businesses in the U.K.

Security was tight at the court on Monday, with some scuffles breaking out between Sharif’s supporters and security forces, who responded with tear gas. Sharif’s Pakistan Muslim League (Nawaz) said it would protest the sentencing.

The Supreme Court disqualified Sharif from politics for life over the allegations last year, and directed an anti-corruption body to investigate three different charges regarding his family’s properties and businesses. The months-long saga has seen him appear before accountability courts 165 times since September 2017, according to English-language Dawn newspaper.

In July this year, he was convicted in one case revolving around family properties in London, and sentenced to 10 years in prison. He was in London at the time as his wife received cancer treatment, but returned to Pakistan days ahead of the election, only to be arrested and imprisoned on arrival.

He was released in September after a court suspended his sentence pending an appeal hearing. It was not immediately clear when he would return to prison after Monday’s verdict but authorities took him into custody immediately.

He was acquitted on the third charge, relating to business in the United Kingdom.

Sharif has been prime minister three times but power has been a rough ride. He was first expelled from office in 1993 on suspicion of corruption. He won an election in 1997, only to be ousted and exiled after a military coup in 1999. He returned to Pakistan in 2007 and took power once more in 2013 until his ousting last year.

It’s a good decision by the court as it’s is very difficult to bring to justice accused involved in white collar crime. It will go a long way to end corruption and money laundering in the Pakistani society. It will deter the politicians and public servants from commission of such crimes.
His brother Shehbaz Sharif ex Chief Minister Punjab is also under investigation.
The real issue then is bringing back the I’ll gotten money stashed abroad.