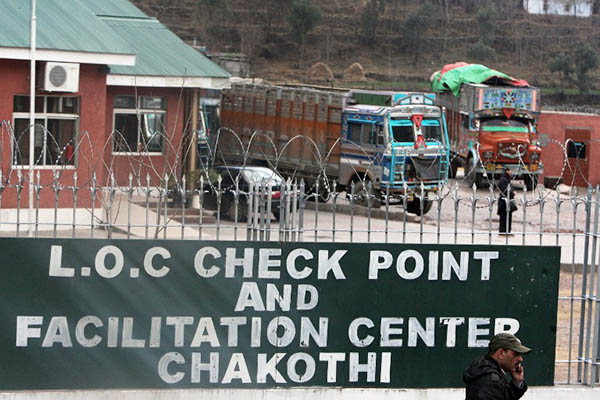 Trade continues to be suspended, as residents of Pakistan-administered Kashmir demand their truckers be allowed to return home.

Bus service across the de facto border in Kashmir will resume next week after being suspended for more than two weeks, a Pakistani official said Saturday.

All movement including traveling and trade along the Line of Control (LoC), which divides the disputed Himalayan region between Pakistan and India, had been suspended after Indian authorities detained a Pakistani truck driver for allegedly carrying 114 kilograms of heroin.

“Senior officials from the two sides met recently and decided to resume the bus service in the first phase from Jan. 3,” said Mohammad Ismail, chief of the Trade and Travel Authority (TTA) in Pakistan-administered Kashmir.

However, he said there has been an impasse over resumption of trade. At least 49 Pakistani trucks and their drivers were being held on India’s side of the border following the incident, while Pakistan had retaliated by holding 27 trucks.

Meanwhile, traders and relatives of the detained truck drivers rallied in Muzaffarabad, the capital of Pakistan-administered Kashmir, on Saturday and said they would not allow resumption of the bus service until all the drivers return to their homes in safety.

“The government should not resume the bus service until India returns our drivers and their trucks. All the local traders and their families will stop this bus from leaving Muzaffarabad on Monday,” said secretary general of Intra-Kashmir Trade Hamid Kashmiri.

Barter trade across the de facto border began in 2008 as part of peace efforts between Pakistan and India, but it is frequently disrupted by disputes. It was last suspended in September 2013 for a period of almost six weeks over a disagreement on the origin of goods being traded.